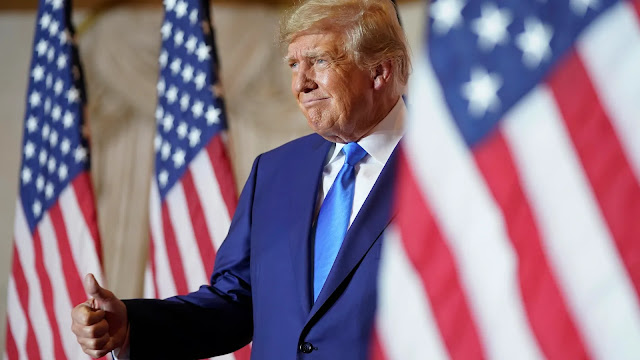 Former President Trump is seeking to reclaim the political spotlight with a Tuesday evening event at his Mar-a-Lago resort that he first teased a week ago, before the midterm elections.
His “special announcement” is widely expected to be the launch of his 2024 presidential campaign, even as the former president faces pushback from within the Republican Party, with many saying such a move should come after next month’s Georgia Senate runoff.
The announcement comes amid multiple criminal investigations into the former president. Trump appears to be at “substantial risk” of prosecution over his efforts to overturn the 2020 election in Georgia, according to a new report from the Brookings Institution.
The event is scheduled to begin at 8 p.m. CT.
Posted by High Plains Pundit on November 15, 2022
Email ThisBlogThis!Share to TwitterShare to FacebookShare to Pinterest
Tags: National