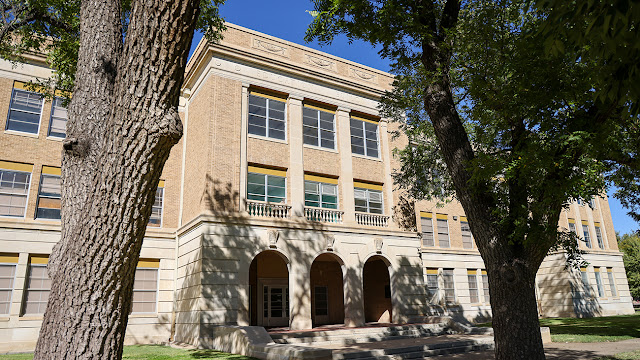 The Texas A&M University System Board of Regents on Nov. 10 approved two major infrastructure projects at West Texas A&M University.
During the regents’ Nov. 10 meeting, approval was given for the $44.9 million Geneva Schaeffer Education Building renovation and the $8.9 million Bain Athletic Center expansion project.
“Top-notch academic and athletic facilities are part of what makes WT exemplary,” said WT President Walter V. Wendler following the Regents’ vote. “Providing our students with the facilities they need to succeed contributes both to their classroom and sports performance. We are grateful for dedicated alumni who continue to give back to the Panhandle’s University.”
Regents approved more than $328 million in capital projects across the system.
The Education Building, the second-oldest building on WT’s campus, will be reimagined as a space that will put WT on the bleeding edge of innovation in distance learning.
“Our goal with the Geneva Schaeffer Education Building is to be a first-mover in the next phase of distance learning, whether that’s virtual reality or advances we don’t even know about yet,” said Dr. Neil Terry, provost and executive vice president for academic affairs. “Our goal is to be as cutting-edge as we can possibly be, and the building will be the vehicle that will propel those strides.”
WT’s number of online courses has grown from 533 to 1,726 in the 10-year span between the 2001-02 and 2020-21 academic years. As part of the University’s long-range plan, WT 125: From the Panhandle to the World, WT expects to increase the number of online students to at least 7,500 students, ultimately approximately 50 percent of total University enrollment.
Revitalization of the Geneva Schaeffer Education Building will allow for additional video studios, production studios for online courses and support spaces.
The building also will be the new home of the WT Graduate School, recognizing the significant growth it has achieved in the past five years. Plans call for new spaces for research and new areas to connect with off-campus students and potential new students.
The University is in the process of selecting an architect firm and construction company for the ambitious project.
In October 2021, WT announced that it was allotted $45 million from Senate Bill 52, which allocated $3.35 billion for capital projects at Texas higher education institutions.
In February, the Schaeffer family announced a $2.5 million gift to rename the building in honor of their late matriarch, who attended elementary school classes in the building in the 1940s, when it housed a demonstration school where education majors could get hands-on training as teachers. Schaeffer earned her bachelor’s degree from WT in 1955, and in April 2016, she was bestowed an honorary doctorate of philosophy in WT’s Terry B. Rogers College of Education and Social Sciences. A public-school teacher for 17 years, she advocated for improvements and opportunities in education for decades and was a driving force in fundraising for the University.
Along with Bain-Schaeffer Buffalo Stadium, the Bain Athletic Center serves as a cornerstone of the excellence of WT Athletics that is second to none in the Lone Star Conference, Division II NCAA Athletics and the State of Texas.
The Athletic Center facility, the vision of longtime WT supporters Ray and Barbara Bain, is in Phase III of construction. When complete, the facility will house sports performance, sports medicine, football and Olympic sport offices, academic success programs, team meeting rooms and the Hall of Champions.
Completion of the center will allow for a centralized location for coaches, staff and student workers in WT Athletics, who are currently occupying offices in eight different buildings across campus.
“The completion of the Bain Athletic Center is critical in order to maintain the level of success expected of the athletic program,” said WT Athletic Director Michael McBroom. “This expansion will provide modern office space for administrators and coaches, add academic and meeting spaces for teams, and enable the program to develop a culture of collaboration and support that is critical to most successful organizations.”
For seven consecutive years, WT Athletics has been rated Best in Texas by the National Association of College Directors of Athletics Directors’ Cup rankings, and is annually recognized as one of the Top 10 athletic programs in NCAA Division II.
Ray Bain attended WT, then became president of First State Bank of Dimmitt in 1985. In 1987, he joined with Stanley Schaeffer and a small group of investors to purchase the bank, which became known as First United Bank in 1994. Today, the bank has expanded to 17 locations across 13 West Texas cities. Bain died in 2013; Schaeffer currently serves as director emeritus.
Barbara Bain, a 1960 alumna, was granted an honorary doctorate of philosophy in education in 2019.
When complete, the Bain Athletic Center will be located west of the Bain-Schaeffer Buffalo Stadium and the WT track and soccer facility.
In addition, the funding approved for the Geneva Schaeffer Education Building project will include almost $10 million for health and safety upgrades across campus, using funds from Capital Construction Assistance Projects approved by the 87th Legislature.
Posted by High Plains Pundit on November 11, 2022
Email ThisBlogThis!Share to TwitterShare to FacebookShare to Pinterest
Tags: Regional