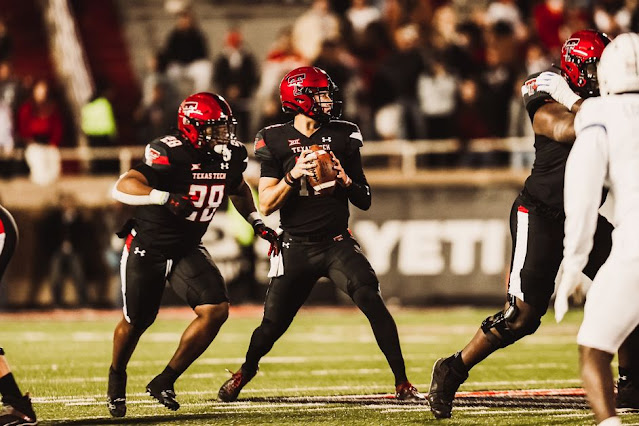 Saturday night in Lubbock, the Texas Tech football team picked up a much-needed victory over Kansas to move within one win of reaching bowl eligibility.  The 43-28 triumph ended a run of four losses in five games for Joey McGuire’s team and brought Tech’s record at Jones Stadium this season to 5-1.  Here are some rapid reactions to what transpired in game No. 10.
Kittley finally commits to the run
Texas Tech football fans have been critical of offensive coordinator Zach Kittley for not running the football enough, especially given the revolving door that has been the Red Raider quarterback position.  Well, on Saturday, Kittley gave that segment of the fan base exactly what they’ve been clamoring for.
Running the football 48 times for 264 yards, Tech was able to pound out yards on the ground all night long.  Meanwhile, Kittley had his offense throw the ball only 34 times for 246 yards.
Three Red Raider running backs helped the cause with SaRodorick Thompson going for 68 yards and a TD, Cam’Ron Valdez accounting for 66 yards on 11 rushes, and Tahj Brooks rushing for 51 yards and a TD.
However, the star of the Red Raider rushing attack came out of nowhere.
Tyler Shough leads the way with his arm and his feet
Given the way he had played in two appearances since returning to action following a two-month absence due to a broken collarbone, many Red Raiders (myself included) didn’t expect too much from QB Tyler Shough.  But in his first start since the season opener, the former Oregon transfer had an excellent showing.  Interestingly, it was his feet that did much of the work for the Tech offense.
Not necessarily known as a mobile QB, Shough was nimble on his feet all night long picking up 76 yards and a rushing TD on 12 carries to lead the team on the ground.  Shough ran fearlessly all night even initiating contact with Kansas defenders on a number of occasions, which is admirable given that twice in the past two years he’s broken his collarbone while carrying the football.
Interestingly, many of Shough’s rushing yards came on designed runs, an indication that Kittley is not going to stop running his QBs despite the fact that all three that have started games for Tech this year have missed time due to injury.
As for throwing the ball, Shough was solid with 246 yards and a TD on 33 pass attempts.  Most importantly though was what Shough and the offense didn’t do.
Tech finally wins the turnover battle
For only the third time this season, Tech did not give the football away as the home team won the turnover battle 2-0.  As you might expect, Tech is 3-0 in games in which it hasn’t committed a turnover this year.
Shough rarely put the ball in harm’s way and in the two or three instances in which the ball was up for grabs, the atrocious Kansas defense was unable to capitalize.  Meanwhile, the Tech defense finally found a way to take the football away more than once in a game.
During the streak that saw Tech drop four of five games, the Red Raiders managed to take the ball away multiple times in only one game, the blowout of West Virginia in Lubbock.  That changed on Saturday night and both Tech takeaways were critical.
Kosi Eldridge came up with a huge interception on the final KU drive of the first half to help Tech preserve a 3-point lead.  Tech would then turn that opportunity into a field goal to go into the intermission up six points.
Then, the play of the game came late in the fourth quarter when Jesiah Pierre came up with a strip sack that was recovered by DT Jaylon Hutchings.  That play essentially sealed the win for the Red Raiders and ended the night for KU quarterback Jason Bean, who did not return with an unspecified injury.
Tech wasn’t perfect on defense against a stout KU rushing attack giving up 242 yards on the ground.  However, the two takeaways that Tim DeRuyter’s side of the ball managed to come up with proved to be massive in this game.
Wilson goes down
Putting a damper on the night was the lower leg injury to defensive end Tyree Wilson who was on crutches on the sidelines after appearing to injure himself while trying to turn the corner on a pass rush move.
While we won’t know the extent of this injury until early next week, it would be wise for Tech fans to get used to the idea of being without Wilson for an extended period of time, perhaps the remainder of the year.  That’s going to put a true freshman in a key role moving forward.
Joseph Adedire will step into Wilson’s starting spot and will have to be a pass-rush force.  On Saturday night, he impressed with three tackles (0.5 for loss) and a QB pressure, most of that coming after Wilson’s departure.  It will be interesting to see if he can elevate his play with Wison likely out for a significant stretch.
An opponent finally misses a FG against Tech
On the night, Kansas kicker Jacob Borcila missed two field goals, each of which hit the right upright and bounced to the turf.  Those six missing points changed the game for KU and helped ensure that Tech never trailed.
What’s fascinating is that it had been since the Houston game in week two that a Red Raider opponent had missed a FG.  Thus, Tech was due for some luck in the kicking game, and finally, the good guys got the benefit of a couple of missed kicks.
Posted by High Plains Pundit on November 12, 2022
Email ThisBlogThis!Share to TwitterShare to FacebookShare to Pinterest
Tags: Sports