GOP has several paths to winning the Senate 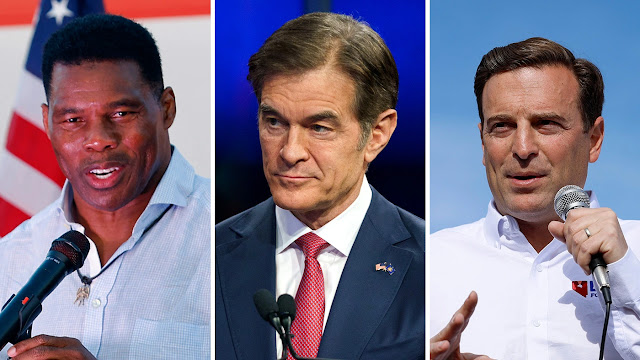 The wind is blowing in the direction of Republicans retaking the Senate majority a day before the midterm elections.
The number of paths to a GOP majority has expanded in the past six weeks, putting the party in position to win as many as 54 seats if everything goes their way.
Here’s how the GOP could take back the Senate after two years in the minority.
Pennsylvania
Republicans have made no bones about it: The likelihood of them winning the majority does not happen without a victory in the Keystone State, where Republican Mehmet Oz is running neck and neck against Lt. Gov. John Fetterman (D).
Of the roughly five or six states that are still up for grabs, Pennsylvania is the only one where the party is attempting to hold a seat in a true toss-up race. In Wisconsin, there are clear signs that Sen. Ron Johnson (R) is the favorite over Lt. Gov. Mandela Barnes (D).
The Senate Leadership Fund and American Crossroads, two super PACs backed by Senate Minority Leader Mitch McConnell (R-Ky.), have spent $54 million on the race — more than any amount spent in any single midterm race.
Fetterman has been ahead in polls for much of the race, but a shaky debate performance that put his recovery from a stroke at center stage delivered more momentum to Oz, who was already rebounding in polls amid steady attacks on Democrats over the economy and crime.
It will be a brutal disappointment for Democrats if Fetterman loses, and a huge win for the GOP. But don’t look for a clear result on Tuesday night. It could take days to know a final result in Pennsylvania.
Nevada
Republicans long viewed Nevada as their best pickup opportunity on the 2022 map.
That view has not changed as former state Attorney General Adam Laxalt (R) has held a slim polling lead over Sen. Catherine Cortez Masto (D).
With a win here, Republicans would force Democrats to take a GOP seat to hold on to the Senate. That shows just how important Pennsylvania would be.
Cortez Masto outraised Laxalt in dollars by a 3-1 margin but has struggled against what has become an increasingly tough national environment.
But the race is no sure thing for the GOP.
Cortez Masto, the first Latina senator, won Hispanic voters by a 29-point margin over former Rep. Joe Heck (R) in 2016. If she can pull a similar number in this race, she’ll probably win.
“Nevada remains the Republicans’ best Senate pickup chance, but that race is nowhere near put away,” Kyle Kondik, the managing editor of the University of Virginia’s Sabato Crystal Ball, wrote last week.
The problem is that a recent CBS News-YouGov poll shows she only leads among Latino voters by 18 points.
Georgia
If Republicans lose either Nevada or Pennsylvania, they still have a path to a majority in Georgia, where Republican Herschel Walker is battling Sen. Raphael Warnock (D).
Walker, the famed University of Georgia running back, remains deadlocked with Warnock despite a series of controversies, including women who have come forward to say the anti-abortion candidate pressured them to obtain abortions.
Those scandals have not knocked Walker out, however, and the GOP hopes he can ride a strong national environment and good feelings from his football playing days to victory.
Voters in both parties could be waiting for some time to learn the Georgia winner, however.
If neither candidate wins more than 50 percent of the vote, the contest will go to a Dec. 6 runoff.
Republican and Democratic strategists alike aren’t expecting either candidate to clear the requisite 50 percent total to sidestep a second contest.
But Republicans are hoping that Walker might creep over the 50 percent mark, since in a runoff he will not be on the ticket with Georgia Gov. Brian Kemp (R), who is expected to win reelection handily over Democrat Stacey Abrams.
New Hampshire and Arizona
These states should be lumped together for one simple reason: If there’s truly a red wave, one or both could wind up in the GOP column — an idea that was considered improbable a month ago.
If Republicans win one or both of these seats, they will almost certainly win the Senate majority. The fact that both are in play says much about why the GOP is optimistic heading into Tuesday night.
These two contests have some similarities. In addition to the national environment, both feature GOP candidates who have been considered subpar by national Republicans, due in large part to their lackluster fundraising ability. Both are running against sitting Democratic senators.
It is also no accident that Biden is unpopular in both states. According to Emerson College surveys, only 39 percent in each state approve of the president’s work in office.
In New Hampshire, Don Bolduc was a heavy underdog in early September after he emerged from a contentious primary to take on Sen. Maggie Hassan (D) but has seen his stock grow after a super PAC aligned with Sen. Mitch McConnell (R-Ky.) spent roughly $16 million on advertising, coupled with what Republicans describe as intense on-the-ground efforts.
Meanwhile, Republicans say that the swing-state nature of Arizona has helped Blake Masters close the gap on Sen. Mark Kelly (D). However, Masters will have to overcome being outraised by a nearly 8-to-1 margin by the retired astronaut.
The other factor at play is the governor race, where Republican Kari Lake has opened up a slight advantage over Arizona Secretary of State Katie Hobbs (D) and is trying to pull Masters and other Republicans over the finish line.
Posted by High Plains Pundit on November 08, 2022
Email ThisBlogThis!Share to TwitterShare to FacebookShare to Pinterest
Tags: National