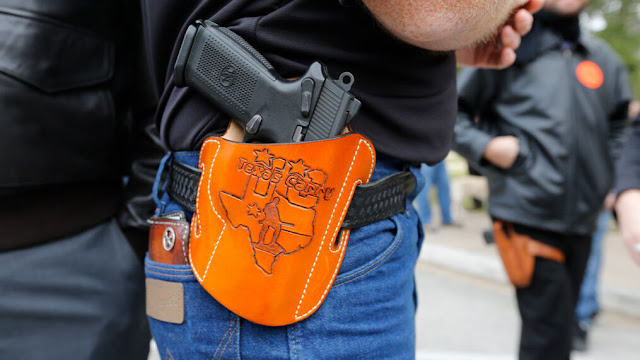 In recent years, more than half of the states in America have enacted their own forms of what are commonly referred to as Constitutional carry laws, allowing eligible citizens to openly carry firearms without a permit. This has been a welcome development for supporters of the Second Amendment and something of a nightmare for the gun-grabbing crowd.
But these laws haven’t been without controversy and even some law enforcement agencies have been expressing concern over some of the ramifications.
This week, the Associated Press looks at some of the complications that have arisen, focusing on the case of Carmon Tussey, a 26-year-old from Louisville, Kentucky who was arrested after bringing an AR-15 into a bar.

Police saw Carmon Tussey walking briskly toward a crowded Louisville bar carrying an assault weapon.
With people running away, officers moved in, service weapons drawn. They put the 26-year-old in handcuffs and confiscated his semi-automatic gun. Tussey was later charged with terroristic threatening, wanton endangerment and disorderly conduct, prosecutors said, and could face up to 20 years in prison.
His lawyer says he “was engaged in perfectly legal behavior” in the incident last year, raising a relatively new legal argument in the United States that now stands before the courts to settle.

The fact that Tussey was walking down the street carrying a semiautomatic rifle was not an issue. But the extenuating circumstances put the police in a difficult situation. The suspect was walking “briskly” toward a bar where he had previously been in some sort of altercation with other people. The fact that he left the bar and rapidly returned with a rifle was a cause for concern.
Tussey’s attorney is claiming that his client violated no laws by openly carrying a rifle. That’s technically true, but after Tussey was taken into custody, he told the police that he “was returning to shoot the people he fought with.” By detaining and disarming him, the police very likely prevented a number of deaths and/or injuries.
The two questions being addressed here are not really simple. First, when and how do the police decide when a person in a Constitutional carry state is enough of a threat to detain and/or disarm them? And second, if Tussey didn’t wind up shooting anyone, did he break any laws and can he be convicted in a court of law?
There doesn’t seem to be any indication that Tussey attempted to resist arrest or conducted any sort of assault on the officers or anyone else. So what will he be charged with? A similar law in Texas includes a provision that doesn’t allow carrying firearms in public in a way that is “intended to alarm people.” But that’s a rather vague term and might not hold up well in court.
Kentucky doesn’t have a similar exception. So Tussey’s attorney may turn out to be correct when he says that he believes he can convince a jury that the police had no right to detain and disarm his client. And prosecutors will have to come up with some sort of charge to lay against him before we even reach that point in the process. But what would have happened if the police hadn’t intervened or had taken too long to arrive? Having told the police that it was his intention to shoot people might set him up with some sort of mental illness defense but is the new rule of the road that the police can’t intervene until after someone starts shooting? As I said at the top… it’s complicated.
Posted by High Plains Pundit on November 01, 2022
Email ThisBlogThis!Share to TwitterShare to FacebookShare to Pinterest
Tags: National