Writing is on the wall for Liz Truss 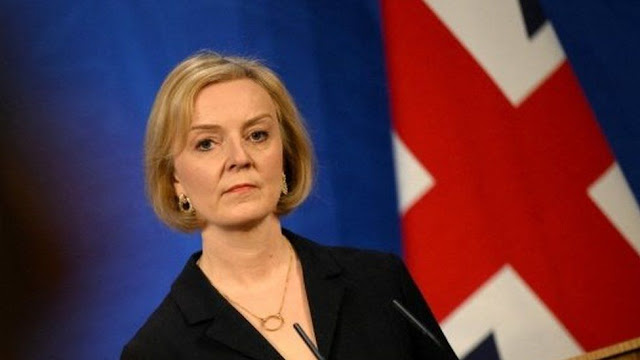 As I write this, the British cabinet is falling apart as if it was an Ikea flat-pack assembled by a drunk. The Home secretary resigned over using private email for government business (ahem . . .) while the chief whip resigned in the chaos surrounding a vote on fracking. Backbencher MP Charles Walker spoke for many in the House, expressing his fury at what Brits call an Omnishambles.
Liz Truss was in office but not in power. That has been confirmed by today’s events. It is increasingly clear that she can no longer command the confidence of a majority of her MPs, despite their reluctance to agree to Labour’s calls for a general election. This was predictable, given the manner of her election, via a process that saw her the second-best choice of Tory MPs (she actually had the support of only a third of them), but the first choice of a small number of party activists.
This disastrous process of choosing a new leader set Truss up for failure, but her choices then compounded the problem. Boris Johnson won a large majority at the last election by assembling a winning coalition of three factions.
First, the Brexiters. These are largely British voters concerned at the erosion of their national identity. While conservative in terms of national tradition, they were largely collectivist in their economic outlook. Many of them had previously voted Labour all their lives. They were crucial to the Conservatives’ breaking through the Red Wall and winning in places Tories had not won for generations. Boris himself was the clear leader of this faction.
Secondly, what we might term “whigs” or right-wing liberals. This is essentially the business interests of the City of London and the Southeast. Traditionally Conservative voters, they may nevertheless hold very liberal social attitudes. Boris’s finance chief Rishi Sunak and the new holder of that office, Jeremy Hunt, represent the leaders here — both successful businessmen, it should be noted. Above all, they don’t want the economic boat rocked. In the last election, the choice was between two disruptions — Brexit or hard-left Corbynism. They chose Brexit as the lesser of two evils.
Finally, the Thatcherite libertarian tendency, a faction over-represented among MPs compared with the electorate, if not party membership. Truss has been the leader here, although younger MPs like Kemi Badenoch would probably have emerged as champions of this group given time, and they probably have more appeal to the Brexit wing.
These three factions don’t always get along well. Boris was able to hold them together, and his cabinet included prominent representatives of all three groups (Boris as PM, Sunak as chancellor, and Truss as foreign secretary was pretty much a triumvirate government). After he went, Truss appeared to give much more weight to her own faction — the source of Walker’s complaint.
The electoral calculus has changed. Collectivist Brexit voters are disgusted with the “giveaways to the rich” in the disastrous mini-budget. Whigs are scared of deregulation and spending cuts. Libertarians have been exposed as having virtually no support in the country.
So the Brexiters are likely to return to Labour. Whigs might be tempted to give Labour leader Sir Keir Starmer a chance on the grounds that he reminds them of Tony Blair (the last Labour leader to do well with this group). That is probably a mistake for both groups.
The writing is on the wall for Truss. Chances are that she will be replaced by Sunak or Hunt with the approval of a majority of party MPs (which really is the way the leader should have been chosen in the first place). There are, however, some calls from the Brexit wing for Boris to return.
Stranger things have happened, as the last two weeks illustrate.
Posted by High Plains Pundit on October 19, 2022
Email ThisBlogThis!Share to TwitterShare to FacebookShare to Pinterest
Tags: World