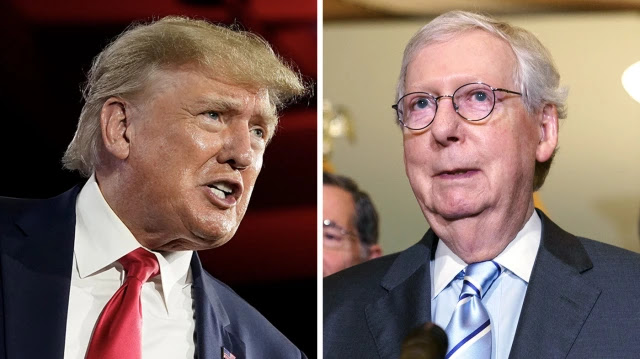 Former President Trump said Senate Minority Leader Mitch McConnell (R-Ky.) has a “death wish” for supporting bills that congressional Democrats have sponsored.
The former president said in a post on his social media platform Truth Social on Saturday that any reason McConnell has for supporting the bills — be it that he knows Trump is opposed to them or if he believes in the “Fake and Highly Destructive Green New Deal” — are “unacceptable.”
“Is McConnell approving all of these Trillions of Dollars worth of Democrat sponsored Bills, without even the slightest bit of negotiation, because he hates Donald J. Trump, and he knows I am strongly opposed to them, or is he doing it because he believes in the Fake and Highly Destructive Green New Deal, and is willing to take the Country down with him? In any event, either reason is unacceptable. He has a DEATH WISH,” Trump wrote.
“Must immediately seek help and advise from his China loving wife, Coco Chow!” he added.
Trump’s post comes after McConnell supported a continuing resolution to fund the government through the middle of December and avoid a government shutdown.
President Biden signed the legislation on Friday after the House passed it mostly along party lines.
Trump and McConnell’s ongoing feud also received some additional fuel recently following news of McConnell’s support for the Electoral Count Act, which senators have advanced in response to the Jan. 6, 2021, insurrection.
The legislation would raise the number of members of Congress required to object to a state’s Electoral College votes in order for the body to reanalyze the results when it counts the ballots. Only one senator and one representative need to object under the Electoral Count Act of 1887, but the new legislation would raise the threshold to one-fifth of both chambers.
McConnell announced his support for the bill that was negotiated by a bipartisan group of lawmakers, but Trump allies like Sen. Ted Cruz (R-Texas) have said that the legislation has been motivated by anti-Trump sentiment.
People who complain about this sort of behavior are often met with a retort that is supposedly self-evident in its meaning and importance: “mean tweets!” The idea behind this line is that Trump’s presidency was fine, except for the “mean tweets,” which, when compared to the ills we’re suffering under President Biden, ought to fade into obscurity.
But this is silly. For a start, “mean tweets” were not the only problem with the way Donald Trump behaved as president, and they’re not the only reason he lost the 2020 election. In effect, “mean tweets” is similar to “tan suit!” — which is what progressives tend reflexively to say whenever President Obama’s scandals are brought up. Obama had many scandals, and his wearing a tan suit was not among them. Trump had many terrible moments, and they cannot be usefully reduced to “mean tweets.” His “mean tweets” were certainly a symptom, but they were not the disease.
But, beyond that, “mean tweets!” isn’t actually a defense of anything, is it? What, exactly, is Trump achieving by tweeting — well, “truthing” — in that manner? He’s lying: McConnell has not been “approving all of these Trillions of Dollars worth of Democrat sponsored Bills,” and nor does McConnell support the Green New Deal. These are claims that have lost all contact with reality. He’s attacking a guy on his own side — a guy without whom almost all of Trump’s achievements as president would have been impossible. And he’s not only attacking a woman based on her race, he’s attacking a woman who served in his own cabinet. We’re told that Trump “fights.” But what is he “fighting” here? What does this do for Republican voters? Forget, for a moment, that it’s grotesque. What, in a purely amoral sense, is the point?
And why would anyone choose to go through it all again? I comprehend the argument that, once Trump has been chosen as the nominee, voters have a binary choice. I also comprehend the argument that, for example, saving unborn children is more important than what Donald Trump says on the Internet. I do not understand why, when one doesn’t have to, one would ever choose to elevate Trump above his current station. At the moment, he really does just have “mean tweets” to offer up. Let’s keep it that way.
Posted by High Plains Pundit on October 03, 2022
Email ThisBlogThis!Share to TwitterShare to FacebookShare to Pinterest
Tags: National