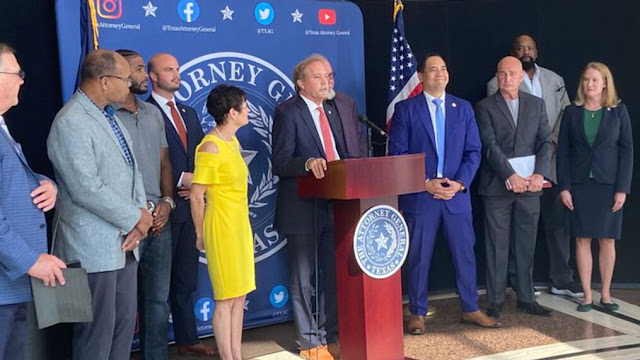 The Texas Attorney General’s Office and a coalition of community and business leaders launched a pilot program Wednesday to combat the opioid epidemic.
Known as the Friday Night Lights Against Opioid Coalition, Texas state leaders are asking high school football coaches to use their teams, parents and school band members to pass out opioid dissolving home kits at their football games.
The packets, known as DisposeRx, contain ingredients that when emptied into a pill bottle with warm water dissolves the medication. The packets are advertised as a safe way to dispose of leftover medication as opposed to throwing them in the trash or down a drain where they can contaminate water.
Texas state officials said they are targeting high school students as accidental overdoses due to synthetic narcotics continue to rise at a rapid rate.
In one Central Texas school district, four high school students died from suspected overdoses last summer.
“With prescription drug misuse on the rise among high school students, more must be done to keep our students safe,” Attorney General Ken Paxton said. “That’s why I’m proud to help launch this program to ensure that we’re doing everything possible to make sure that our children are safe and that unused opioids can be disposed of promptly and properly.”
Fentanyl is a synthetic opioid approved for treating severe pain with a prescription, however it continues to flood the illicit drug market causing a sharp rise in fentanyl-related deaths in the Lone Star State.
In 2018, Texas reported 214 fentanyl-related deaths; on 2021, more than 1,600 deaths were attributed to the drug.
Joe Martin, of Texas High School Coaches Association, said this is particularly frightening among young athletes who may be prescribed the medication due to an injury but decide to sell some to peers.
As little as 2 milligrams could be fatal to an adult and even less could cause the death of a child, health officials say.
The pilot program will work to reduce the number of teen overdoses — especially among student-athletes — by distributing over 3.5 million at-home medication/drug disposal packets, state officials said. Martin said the packets will be distributed at the remaining home games for the regular season at participating schools.
“Our 25,000 member coaches are very aware of this crisis … and will be quick to step up and make a huge impact with this distribution,” Martin said.
Posted by High Plains Pundit on October 15, 2022
Email ThisBlogThis!Share to TwitterShare to FacebookShare to Pinterest
Tags: Texas