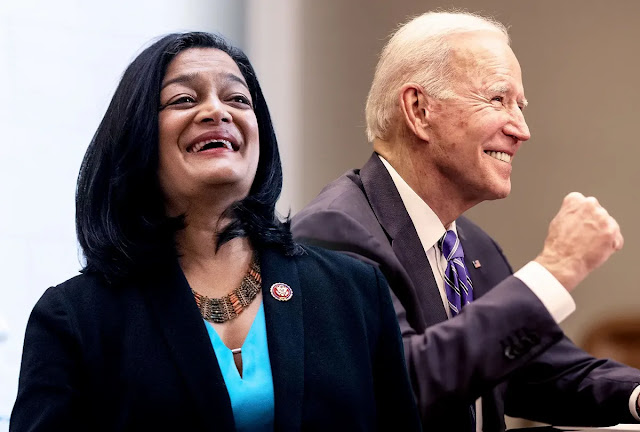 Hey, remember from 2016 to 2020, when just about every Democrat saw Vladimir Putin as the root of all evil, almost every Republican was accused of being in cahoots with the Russian government, and even staid establishment voices like the Brookings Institution warned that “the GOP became the party of Putin”? Remember how that overwhelming wave of (largely justified) hostility to the Putin regime started just four years after Obama’s “The 1980s are now calling to ask for their foreign policy back” attack on Mitt Romney?
You’re going to need a neck brace for whiplash again, because 30 House Democrats, led by Congressional Progressive Caucus chair Pramila Jayapal, have written to Biden, saying, “We urge you to make vigorous diplomatic efforts in support of a negotiated settlement and ceasefire, engage in direct talks with Russia, explore prospects for a new European security arrangement acceptable to all parties that will allow for a sovereign and independent Ukraine, and, in coordination with our Ukrainian partners, seek a rapid end to the conflict and reiterate this goal as America’s chief priority.”
Of course, any negotiated settlement will allow Russia to keep the territory it has annexed. There is no way that Putin fought this war, with perhaps 68,000 Russian soldiers killed and another 205,000 wounded, just so he could give back all the territory his forces conquered. And there is no “new European security arrangement acceptable to all parties that will allow for a sovereign and independent Ukraine.” You might as well wish for a demilitarized zone enforced by peacekeeping elves and dwarves mounted on unicorns. Putin has made his position clear; in fact, he can’t make it much clearer. These House progressives are imagining a much more reasonable, conciliatory, and nicer Putin who’s willing to let bygones be bygones and who earnestly wants peace — a Putin who doesn’t exist.
Anyway, after four years of every wing of the Democratic Party denouncing Putin in the most furious terms . . . now, after he’s invaded a sovereign neighbor and slaughtered God knows how many innocent civilians, now the progressives want to sit down and negotiate with him?
Shortly after the letter was released, some of the House Democrats ran away from the letter they had signed. Marc Pocan of Wisconsin said it was outdated: “Not sure why it’s dated 10/24 as it was from July.” (Er, it’s not like Putin was a nicer, more trustworthy, or less barbaric guy in July.) Over in Politico’s Playbook newsletter, one member of the House Democratic leadership fumed, “Vladimir Putin would have signed that letter if asked. That bone-headed letter just put Dems in the same league as Kevin McCarthy, who said in the same week that Ukraine funding could be in jeopardy.”
If you’re calling for negotiations with Putin now, over the objections of the Ukrainians, you don’t get to call anyone else “soft on Russia.”
Posted by High Plains Pundit on October 25, 2022
Email ThisBlogThis!Share to TwitterShare to FacebookShare to Pinterest
Tags: National