Economy coming back to bite Dems in midterms 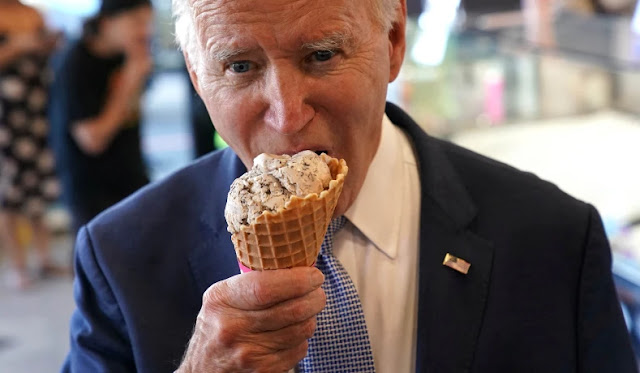 President Biden is enjoying his old habits, licking an ice-cream cone and boasting that “our economy is strong as hell,” as two new polls indicate that Americans think the economy is doing terribly with the midterm elections just weeks away. If a “red wave” washes out scores of Democrats in November, there will be a lot of justified finger-pointing at the president and jokes about whether the “Inflation Reduction Act” would be more accurately called the “Democrat Reduction Act.”
In an image right out of a Republican ad-maker’s dreams, this weekend President Biden went to a Baskin-Robbins in Portland, Ore., and, while eating an ice-cream cone, declared, “Our economy is strong as hell.” Biden’s rosy-eyed assessment came just days after updated figures showed the inflation rate at 8.2 percent.
As luck would have it, back in March, folks on the right created a meme of Biden licking an ice-cream cone and telling someone who can’t afford food or gas, “Best economic recovery in history, Jack!”
This weekend brought two national polls focusing on the midterms, and while the topline numbers are good for Republicans, let’s home in on how Americans currently feel about the economy, in light of Biden’s claim that it is “strong as hell.”
In the Siena/New York Times poll, just 24 percent of likely voters said the country is on the right track, while 64 percent said the country is headed in the wrong direction. When asked whether they approve or disapprove of the way Joe Biden is handling his job as president, 39 percent said they approve, while 58 percent said they disapprove. When asked an open-ended question about what the biggest problem facing the country is, 26 percent said the economy (or jobs, or the stock market) and another 18 percent said inflation. Just 5 percent said “abortion.” Also note that among Hispanics, 37 percent list the economy as the top problem facing the country.
In the YouGov/CBS News Battleground Tracker poll, very few Americans share Biden’s opinion that the U.S. economy is as “strong as hell.” Just 6 percent of respondents said that “things in America today” are going very well, and just 5 percent rated the economy as “very good.”
Overall, 29 percent rated “things in America today” as going very well or well, and 71 percent rated them as either going badly or going very badly — with 40 percent choosing the worst option. Just 27 percent of Americans rated the economy as very good or fairly good, while 30 percent rated it “fairly bad” and 40 percent rated it as “very bad.” Only 15 percent of respondents said the economy was getting better, while 65 percent said it was getting worse, and 20 percent said it was staying about the same. Only 5 percent of respondents said higher prices had not affected their household finances. When asked about gas prices in the last few weeks, 63 percent said prices had been going up, 13 percent said they had been going down, and 18 percent said they’d been staying the same.
When asked about their view of the Democrats’ economic policies during the last two years in Congress, 29 percent said they had been helpful to the economy, 48 percent said they had been harmful to the economy, and 13 percent said they had not impacted the economy. Another 10 percent gave the delightfully honest answer, “I’m not sure what the policies were.”
By double digits, Democrats are still losing independents who report their personal financial situation is bad, and those for whom high prices have made their lives worse or more difficult. Democratic policies are not the main reason people see for inflation — more pin blame on international forces and supply issues — but the party isn’t absolved either. Two-thirds of voters report seeing gas prices go up. That isn’t helping Democrats: those who report increases are more apt to blame Democratic policies for it.
If the midterms turn into a Democratic wipeout — and at this moment, it definitely looks more like a red wave trending toward a red tsunami than a red wave trending toward a red trickle — there will be a lot of finger-pointing about the Democratic Party’s economic messaging during the past year.
If you take your usual Green New Deal-esque wish list and rename it the “Inflation Reduction Act” and pass it with great fanfare, then the electorate will expect inflation to go down. Expectations will get even higher after the president boasts that, “This bill cut costs for families, helped reduce inflation at the kitchen table.” (Notice Biden’s use of the past tense there.) In mid August, Biden and the Democrats pushed almost all their chips to the middle of the table and bet that inflation wouldn’t seem quite so bad by the time voters went to the polls in November. They lost that bet.
In fact, yesterday on CNN’s State of the Union, Colorado senator Michael Bennet unveiled what will likely be increasingly common excuses from Democrats:

Well, because the elements of the Inflation Reduction Act aren’t going to kick in for a while, Dana.
I mean, the cap on drug prices for seniors and the requirement finally — finally, we overcame pharma to have requirement that Medicare negotiate drug prices on behalf of the American people — capping insulin at $35 a month, I mean, these are things that are going to take a while to put in place. . . .
I’m concerned that the Federal Reserve kept their interest rates at zero for too long and that their quantitative easing was too aggressive. But that’s looking in the rearview mirror.

Bennet is arguing that the Inflation Reduction Act’s effects haven’t really started kicking in yet in October, while Biden was boasting that it was already working in September.
The New York Times notices that Democrats aren’t talking about their economic policies on the campaign trail:

Democratic candidates in competitive Senate races this fall have spent little time on the trail or the airwaves touting the centerpiece provisions of their party’s $1.9 trillion economic rescue package, which party leaders had hoped would help stave off losses in the House and Senate in midterm elections. In part, that is because the rescue plan has become fodder for Republicans to attack Democrats over rapidly rising prices, accusing them of overstimulating the economy with too much cash.

When Democratic lawmakers don’t want to talk about the policies they enacted, I suspect voters see that as a de facto admission that those policies didn’t work.
Oh, and in early August, when the narrative of the big Democratic midterm comeback was picking up steam, remember who told you, “When inflation is raging at a 40-year high, and gas and food prices are skyrocketing, the incumbent party is going to get thrashed.”
Posted by High Plains Pundit on October 17, 2022
Email ThisBlogThis!Share to TwitterShare to FacebookShare to Pinterest
Tags: National