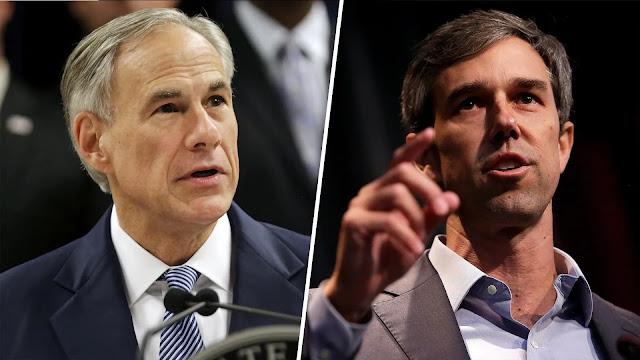 The latest Quinnipiac University poll released on Wednesday shows Texas Governor Greg Abbott is up seven points over his Democrat challenger, Robert Francis “Beto” O’Rourke. Though it is a single-point lead, it is well outside the margin of error. Six weeks out from the midterm elections in November, things are not looking good for O’Rourke. Governor Abbott leads in all recent polls.
The poll of likely voters shows Abbott at 53% and O’Rourke at 46%. Some bad news for O’Rourke, besides trailing in the polls, is that the Quinnipiac poll shows there is little to no wiggle room with voters. Their minds are made up.
Brandon Rottinghaus, a University of Houston political science professor, said the poll confirms that Republicans and Democrats are largely unified around their respective candidate. The poll found that 96% of Republicans favored Abbott, while 96% of Democrats favored O’Rourke.
“There’s not a lot of wiggle room,” he said. “This is going to be a very base versus base election, and there are likely a lot of people in the middle who may not choose to vote.”
There is a sharp distinction between the two candidates. Abbott is a conservative Republican who is focusing his campaign message on law and order and border security. Crime is up in all major cities in Texas and safety and security is a top concern. Every voter in Texas knows the Biden border crisis is real and it is a humanitarian crisis. Governor Abbott has done everything possible to help relieve the overcrowding at the southern border, including busing illegal migrants to sanctuary cities once they are released by Border Patrol. Texas voters approve of the migrant buses.
Likely voters in Texas are divided on migrant busing with 51% approving the action and 47% disapproving. Republicans heavily favor the action while Democrats largely disapprove.
A majority of respondents said Abbott would handle the border, gun policy and the economy better than O’Rourke.
“That is a trifecta,” Rottinghaus said. “If the race is framed to be about those issues, Abbott’s going to have a much easier time.”
The Biden administration has ignored Texas border problems and refused, for the most part, to send the needed resources to secure the border. Governor Abbott created Operation Lone Star to address border enforcement and human trafficking, along with drug cartels, along the border. To date, Texas taxpayers have provided nearly $4 billion to Operation Lone Star. Abbott is doing Biden’s job in Texas. It is the responsibility of the federal government to secure the southern border.
Beto’s campaign focuses on abortion. O’Rourke also calls for greater gun restrictions and has callously milked the tragic mass shooting in Uvalde to blame Governor Abbott for the deaths of nineteen students and two teachers.
Abortion ranked second as the most urgent issue in the poll with 17% of respondents selecting it as the most pressing concern. For Democrats, it was considered the most urgent issue at 36%, with gun policy ranking second at 17%.
But only 8% of the total respondents said that gun policy was the most important issue.
O’Rourke will face off with Governor Abbott on Friday in a debate at the University of Texas-Rio Grande Valley. This is Texas and high school football is sacred on Friday nights. People don’t really pay much attention to political debates anyway because they usually happen after voters have already made up their minds, as is the case in this race. That is especially in midterm elections where there is less interest than in presidential elections.
This is likely Beto’s last shot at elected office, at least for the near future. When he loses in November, it will be his third loss in a row. He lost to Senator Cruz by just 3 points, he dropped out of the Democrat primary in 2020 even before the Iowa caucus, and now he’s running for governor. He was once the Democrats’ great hope, their Golden Boy who would turn Texas blue. The people in the entertainment industry still like him and raise money for him, and he has the backing of George Soros.
Real Clear Politics aggregate averaging has Abbott up by 8 points. In order to change the course of this election, O’Rourke will have to have a stellar performance in the debate against Abbott. That won’t happen. Abbott is a skilled debater and public speaker. Political talking heads doubt that O’Rourke can have the kind of moment during the debate that will change things up.
With his back against the wall, O’Rourke has every incentive to come out swinging at the debate.
“I do think O’Rourke needs to do something to change the dynamic of the race. I think Abbott maintains a modest but real lead,” said Keir Murray, a Texas-based Democratic strategist.
Paul Fabrizio, a professor of political science at McMurry University in Abilene, Texas, concurred that O’Rourke “clearly needs to do something to stand out. … It has to be one of those viral moments that really jumps out.”
But a gift to O’Rourke in the shape of a gaffe by Abbott appears improbable, Fabrizio added.
“Gov. Abbott, across his career, is a very careful politician, well-trained and well-versed on using language not to attract attention,” he said. “Beto O’Rourke has a tough road ahead.”
The Texas gubernatorial election will be a test between the importance of issues with voters. Is crime, inflation, the economy, and border security most important? Or is it abortion and gun control? If I was a betting person, my money would be on the man talking about the first set of topics.
Posted by High Plains Pundit on September 29, 2022
Email ThisBlogThis!Share to TwitterShare to FacebookShare to Pinterest
Tags: National