Looking for something to watch? I recommend The Offer 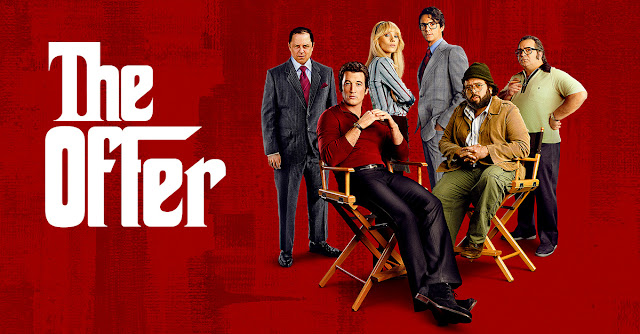 A few months ago, I recommended the Paramount Plus limited series The Offer, a dramatization of producer Al Ruddy’s experience of making the 1972 film The Godfather with Francis Ford Coppola. In Ruddy’s account of events, just about everything that could go wrong did go wrong, and he and his team constantly had to put out metaphorical fires and improvise solutions for every kind of conceivable problem. Several readers and listeners have written in and said they’ve enjoyed it.
Chock full of, “Hey, it’s that guy!” character actors playing against type, the series almost parallels a heist film. You’ve got the mastermind — Ruddy, played by Miles Teller, and one by one, he assembles his crew of misfits: right-hand woman Bettye McCartt (Juno Temple), author Mario Puzo (Patrick Gallo), director Coppola (Dan Fogler, who usually plays larger-than-life comedic characters and shows exceptional range here) and eventually, the eccentric but ingenious Marlon Brando (Justin Chambers). All if this is under the eye of Paramount boss Robert Evans, played by Matthew Goode, as a jovial, fast-talking, always-moving king of Hollywood. If Goode’s performance were any bigger, he would be Austin Powers. Burn Gorman, whom you know as the odd-looking sinister henchman from a bunch of your favorite films, plays the manic and mercurial CEO Charles Bluhdorn, and Colin Hanks, and who looks and sounds more and more like his father with each passing year, is the skeptical executive Barry Lapidus.
This is another case where, at least by the measuring stick of the website Rotten Tomatoes, the tastes of the critics and the tastes of the general public diverge rather sharply: Roughly 57 percent of critics liked it, while 95 percent of viewers who registered their opinion with the site liked it.
Now, perhaps that audience response is self-selecting, as those disinclined to like it wouldn’t watch. But if that was the case, then every movie and show on Rotten Tomatoes would have a similar sterling score.
And when I started looking for reviews of The Offer, it seemed like the ones I found hated it.
Rolling Stone called it “a total waste of time.” The Hollywood Reporter shrugged, saying, “It’s a whole lot of trivia and very little substance.” IndieWire sneered it was “a soulless, vapid piece of Content™ that’s about as far removed from ‘art’ as professionally produced television can get.” The AVClub went with the predictable declaration that it “sleeps with the fishes.”
A lot of the reviews seemed almost angry at the series for existing at all. Maybe it’s because they love The Godfather and its sequel so much — there was only one sequel, right? Right? — that they think the films will be harmed by the show.
But I couldn’t help but wonder if some critics were irritated that this fairly big-budget, big-cast, prestige TV offering wasn’t serving them one clear modern message — or “The Message™” as the sardonic YouTuber Critical Drinker calls it.
There are a few scenes that demonstrate how badly women were treated in Hollywood back then. (Boy, good thing that’s all fixed, right?) And the New York mob’s attitudes toward African Americans are as awful as you would suspect. But those are lines and scenes here and there, by no means the series’ central theme or message.
By and large, the message of The Offer is that sometimes it takes a bunch of impassioned oddballs to make a masterpiece. Ruddy and his team are quintessential underdogs — insufficiently experienced, insufficiently well-connected, scraping by on a minimal budget — and, as the story tells it, continually doubted, undermined, opposed, and underestimated. But they believe they’ve got the pieces of a spectacular movie in their hands, and they doggedly keep finding new ways to push the creation process forward.
The Offer isn’t perfect. It doesn’t stick the landing; the last episode or two run low on momentum; as the film gets closer to completion, the stakes feel lower.
But looking at the numerous scathing or near-scathing reviews, I’m left wondering . . . do today’s reviewers not merely reflexively dislike any work that could be construed as conservative, or do they instinctively dislike any work that is apolitical? Is it that, because The Offer doesn’t have much to say about the environment, race relations, gay rights, Donald Trump, or any other 2022 cause célèbre that certain reviewers just couldn’t find anything interesting in it?
The Offer is a really fun series that allows you to escape all of the political and cultural controversies of the modern day . . . and I think some critics really disliked it for being that.
Posted by High Plains Pundit on September 26, 2022
Email ThisBlogThis!Share to TwitterShare to FacebookShare to Pinterest
Tags: National