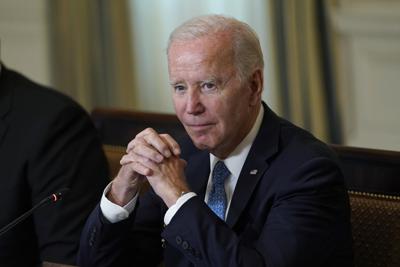 The Pacific Legal Foundation (PLF) filed a lawsuit on Tuesday against the Department of Education over its new student loan cancellation policy, becoming the first organization to challenge the Biden administration’s move to forgive up to $20,000 in student debt per borrower.
The federal lawsuit, filed in the U.S. District Court for the Southern District of Indiana, contends that Biden’s decision to cancel student loan debt for some borrowers is illegal because Congress, which holds the power of the purse, did not approve it.
“It’s flagrantly illegal for the executive branch to create a $500 billion program by press release,” said PLF attorney Caleb Kruckenberg in a statement. “And without statutory authority or even the basic notice and comment procedure for new regulations.”
President Biden announced in August his administration would cancel up to $10,000 in student loan debt per borrower making under $125,000 per year and $20,000 for recipients of the Pell Grant relief program for lower-income borrowers.
The administration, anticipating legal challenges, cited the Higher Education Relief Opportunities for
Students (Heroes) Act of 2003 as a justification to cancel the student loans.
That law says the Education Department may waive or modify statutes or provisions related to student financial assistance programs during war or national emergencies, with the COVID-19 pandemic being a justification for debt cancellation.
The PLF lawsuit says the cancellation policy is illegal under the Heroes Act because it is not “necessary” nor targeted at any harms caused by the national emergency.
The organization’s lawsuit is filed on behalf of plaintiff Frank Garrison, a public interest lawyer with the PLF who is paying off his federal student loans through the Public Service Loan Forgiveness program.
Garrison says he is set to pay off his debt in roughly four years, but as a Pell Grant recipient he would have his debt wiped out under Biden’s order. If that happens, he would face a state income liability tax of around $1,000, which he would otherwise not have to pay if Biden did not cancel his debt.
Indiana has a provision in state law that treats debt cancellation as income and thus taxes it, the Indy Star reported.
The PLF seeks an injunction halting the cancellation policy from going into effect and a judgment preventing any further action to cancel student loan debt.
The Congressional Budget Office estimated Monday the cost of the cancellation policy is around $400 billion, although that figure is in dispute from proponents of loan debt cancellation.
About 43 million borrowers share $1.6 trillion in federal student loan debt. Biden campaigned on canceling a portion of student debt.
Republicans have slammed the loan cancellation policy as a handout to wealthier Americans and an expensive policy.
Steve Simpson, an attorney at the PLF, said canceling loan debt was “unjust to those who have paid their loans or never took any.”
“Loan cancellation will make Americans more divided, as those who paid their loans — or never went to college — will have good reason to think that we no longer have a government of, by, and for the people,” Simpson said in a statement.
Posted by High Plains Pundit on September 27, 2022
Email ThisBlogThis!Share to TwitterShare to FacebookShare to Pinterest
Tags: National