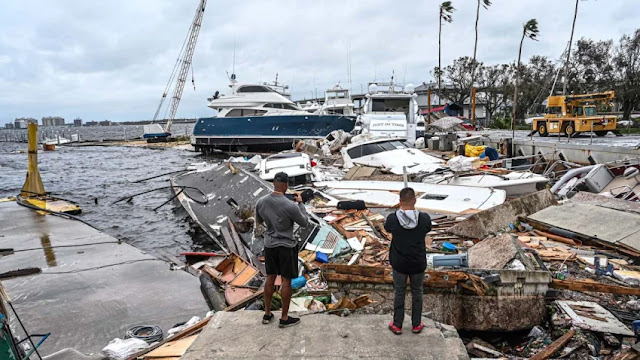 Florida Gov. Ron DeSantis (R) said the amount of water rising in parts of Florida from Hurricane Ian is “basically a 500-year flood event.”
DeSantis said at a press conference on Thursday that there was potential for major flooding in Orange and Seminole counties, up to Jacksonville and the northeastern part of the state. He said water will likely continue to rise throughout Thursday even as the storm is passing.
Hurricane Ian made landfall on Florida’s Gulf Coast on Wednesday as a powerful Category 4 storm with maximum sustained winds of 155 miles per hour, making it one of the strongest to ever make landfall on the continental United States.
Ian has since been downgraded to a tropical storm, but strong winds and rain remain in Florida.
DeSantis said the public will see damage done in southwest Florida, adding that some flooding has occurred hundreds of miles away from where the storm made landfall.
The governor said “massive amounts” of food and water are in the area to be distributed and that 28 large helicopters from the National Guard and Coast Guard are conducting rescue operations. Additional air assets will be added throughout the day to support the operations.
DeSantis said the next 72 hours will be key for rescue missions. He said rescue efforts will focus on the areas with the most inland flooding.
“You’re looking at a storm that changed the character of our state,” he said.
DeSantis said he spoke with President Biden on Thursday morning, and Biden has issued a major disaster declaration for nine counties.
The governor, who is seen as a potential 2024 presidential candidate, said he told Biden he will ask for the number of counties to be expanded based on the damage the storm has caused in the center part of the state. He said the declaration will allow Floridians to seek individual assistance from the Federal Emergency Management Agency.
The state has been granted 100 percent federal assistance for the next 30 days to support its recovery efforts.
Hazards remain as power lines and trees are down, and officials encouraged residents not to survey the damage for their own safety.
DeSantis said officials have received reports of two deaths that were likely related to the storm.
Posted by High Plains Pundit on September 29, 2022
Email ThisBlogThis!Share to TwitterShare to FacebookShare to Pinterest
Tags: National