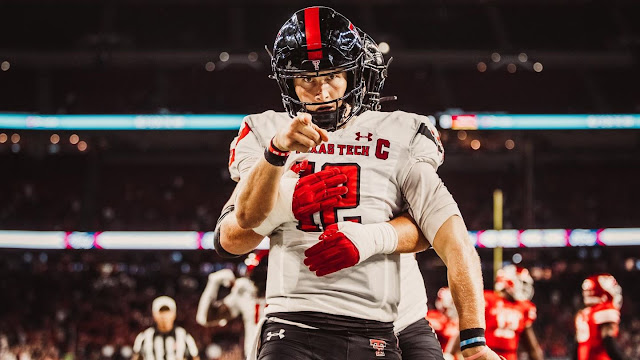 Sunday evening, the Texas Tech football program answered the offseason’s biggest question by sending out a Tweet containing a 26-second video of Tyler Shough calling plays during a recent practice. The text of the Tweet simply read “QB1”.
With that, former Oregon transfer Tyler Shough was named the 2022 starter in a move that should surprise no one.  Despite missing the final eight games of last season and having started only eleven total contests at the collegiate level, Shough was the clear frontrunner when this QB competition began and he never did anything to relinquish his lead over Donovan Smith or Behren Morton.
"I first want to praise all three of our quarterbacks as this was an unbelievable competition," Red Raider coach Joey McGuire said. "Tyler has played well and put our offense in position to be effective consistently throughout camp, which has earned him the right to be our starting quarterback. Tyler has a great football IQ and has really captured what we want this offense to look like with the type of responsibility we put on the quarterback.
"As I've said all along, though, we fully intend for Red Raider fans to see all three of these QBs throughout the season. This is as gifted as a room as I've ever seen, and I'm willing to put the depth of our quarterback position against anyone else in the country. I know both Donovan (Smith) and Behren (Morton) will be ready when called upon as they have certainly earned the respect of myself and their teammates."
In a way, this feels like the safe play, which coaches are almost genetically predisposed to make.  The oldest and most experienced option that McGuire and offensive coordinator Zach Kittley had in their QB room, Shough has the highest floor of any QB on the roster.   In other words, were he to play at his worst, it would be better than either Smith or Morton would be at their worst.
The time for the other two QBs will come eventually.  Both are talented enough to lead a Big 12 program.  For now, though, it is Shough’s team to run.
Last season, Shough was off to a solid start as a Red Raider before a collar bone injury prematurely ended his season.  Completing 69.4% of his passes, he threw for 872 yards and six touchdowns despite playing in only four games (the final of which he exited in the first quarter with his collar bone injury).
For his career, he’s been a 66.4% passer while amassing 22 touchdowns and throwing nine picks.  But he’s never spent a full season leading a collegiate offense.
Shough’s first season at Oregon (2019) was spent as the primary backup to now Los Angeles Chargers quarterback Justin Herbert.  Then, as a sophomore in 2020, he split time with Anthony Brown, who provided the Ducks with more of a running threat.  What’s more, we must keep in mind that 2020 was the season shortened by COVID-19, the season in which Oregon played only seven games, all of which Shough started.
That led to last year when Shough was finally given the opportunity to be a full-time starter.  He began the season throwing for 231 yards and a TD as Tech beat Houston in the season opener.  A week later, he was not sharp as he completed only 12 of 22 passes for 174 yards as Tech narrowly escaped an upset bid by FCS opponent Stephen F. Austin.  That night, he was also picked off twice.
In week three, Shough would have his best game yet as a collegiate, though it came against lowly Florida International.  With 399 yards through the air on 26-35 passing, he had four TDs as the Red Raiders rolled to a blowout win.
Unfortunately, that would be about all we would see of Shough though as he would attempt only 11 passes (completing 9) against Texas in week four before he was lost for the duration of 2021.  Interestingly, on the play in which he was hurt, it was Shough’s feet that got Tech into the endzone as he scrambled for a six-yard TD.  As he dove over the goal line, he landed awkwardly on his shoulder which resulted in his collarbone injury.
Almost a calendar year later, Shough is back and his right arm will go a long way toward determining how McGuire’s first season as a head coach will play out.  Can Shough finally give Tech the type of QB play that the program has been yearning for since the end of the Pat Mahomes era?  Can he stay healthy for an entire season?  Can he be one of the best QBs in the Big 12?
Those are queries that will be addressed over the next three-plus months now that the offseason’s predominant question has been answered.
Posted by High Plains Pundit on August 21, 2022
Email ThisBlogThis!Share to TwitterShare to FacebookShare to Pinterest
Labels: Sports