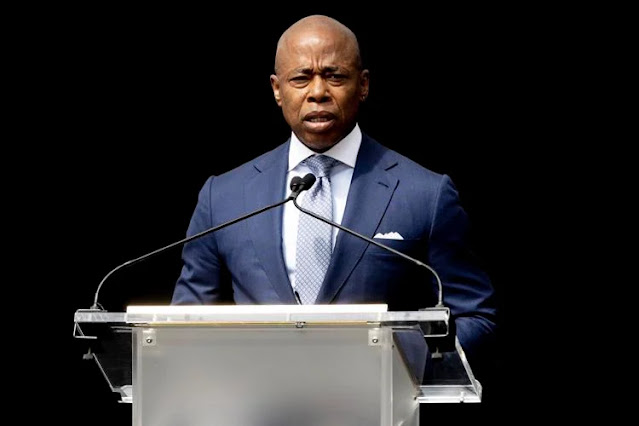 By Bethany Blankley
New York City Mayor Eric Adams again criticized Texas Gov. Greg Abbott for illegal immigrants bused from the border to the Big Apple.
Adams said a bus of roughly 40 people arriving at the Port Authority in New York City on Sunday was “horrific.” Fourteen got off the bus at the stop.
"This is horrific, when you think about what the governor is doing," Adams said of Abbott.
"We're finding that some of the families are on the bus that wanted to go to other locations and they were not allowed to do so," he added. "They were forced on the bus with the understanding that they were going to other locations that they wanted to go to, and when they tried to explain they were not allowed to do so."
This was the second bus to arrive in New York City after Abbott announced he was sending buses there after first busing illegal immigrants to Washington, D.C. in April. Abbott has invited Adams to visit the southern border in Texas to see first-hand the crisis unfolding there every day. He’s also invited Washington, D.C. Mayor Muriel Bowser, who’s asked for help from the federal government and still hasn’t received it.
While Adams complained about 40 people arriving on Sunday, Border Patrol Sectors in Texas are dealing with more than 5,000 people illegally entering every day.
In June in the Big Bend Sector, there were nearly 3,000 people who were apprehended or recorded as gotaways. In the Del Rio Sector, there were over 57,000; in the El Paso Sector, over 35,000; in Laredo Sector, over 14,000; in the Rio Grande Valley Sector, over 49,000.
Neither Adams or Bowser responded to Abbott’s invitation offer, instead choosing to blame him. But Abbott and other Republicans blame the policies of the Biden administration, and note that New York and Washington are so-called “sanctuary cities.”
Adams has accused Abbott of using “innocent people as political pawns to manufacture a crisis.”
But Abbott fired back, saying the “New York City mayor says this is ‘horrific.’ Did he say it was ‘horrific’ when Biden flew plane loads into New York? Nope! Horrific is Biden's policy of letting in 2 million illegal immigrants. The NY mayor has no idea how horrific it really is.”
Abbott also has been posting pictures of Texas National Guardsmen assisting local law enforcement and border patrol agents with apprehending suspected human smugglers along the Texas-Mexico border.
Biden eliminated policies that were working to secure the border and limit illegal immigration, the Texas governor said, and “now we have chaos.” As a result, Texas has had “to step up and take unprecedented action” through a range of border security initiatives, including being the first state to build its own border wall.
Since Abbott launched Operation Lone Star last March, the state’s multiagency effort has led to over 18,000 criminal arrests, 15,400 felony charges, and over 325.9 million lethal doses of fentanyl seized.
Posted by High Plains Pundit on August 08, 2022
Email ThisBlogThis!Share to TwitterShare to FacebookShare to Pinterest
Labels: National, Texas