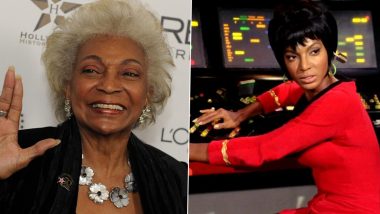 The bridge of the original Enterprise got a little emptier over the weekend, with the death of Nichelle Nichols at age 89. Nichols played Starfleet officer Nyota Uhura in the first Star Trek TV series and several subsequent films. The tributes are rolling in, and rightly so.
In a confident yet unassuming fashion, Nichols became an essential part of series creator Gene Roddenberry’s vision of a more inclusive future for humanity (an admirable aspect of the show’s vision, even if other parts of its “utopia” are more suspect). This was no mean feat, given that Star Trek began just after major civil-rights legislation challenged the state-backed segregation long dominant in the American South.
As Uhura, Nichols created one of the first prominent black female roles on American television; she has been cited by many as an inspiration. She even shared one of the earliest interracial kisses, with co-star William Shatner (Captain Kirk). Network executives were nervous about the scene and wanted to have a take without such a kiss just in case, but the two actors intentionally messed up every non-kiss take.
Some Star Trek cast have had an ambiguous relationship with the stardom that arose from their having been on the show (something made light of in the character Alexander Dane, played by Alan Rickman, in the loving Star Trek parody Galaxy Quest). Leonard Nimoy, a.k.a. Spock, released an autobiography in the 1970s called “I Am Not Spock.” (Its 1995 sequel: I Am Spock.)
For Nichols, this moment came early in the show’s run. When she began thinking about quitting the show, she told Roddenberry, then attended a fundraiser for the NAACP, where she was informed someone who called himself her “greatest fan” wanted to meet her. Expecting a more stereotypical Trekkie, she was surprised to behold one Martin Luther King Jr., apparently an avid Star Trek watcher who was enthusiastic about her portrayal of Uhura.
Here’s the rest of the story, as she related it in a 2011 interview:
And I was speechless. He complimented me on the manner in which I’d created the character. I thanked him, and I think I said something like, Dr. King, I wish I could be out there marching with you. He said, no, no, no. No, you don’t understand. We don’t need you on the — to march. You are marching. You are reflecting what we are fighting for. So, I said to him, thank you so much. And I’m going to miss my co-stars.
And his face got very, very serious. And he said, what are you talking about? And I said, well, I told Gene just yesterday that I’m going to leave the show after the first year because I’ve been offered — and he stopped me and said: You cannot do that. And I was stunned. He said, don’t you understand what this man has achieved? For the first time, we are being seen the world over as we should be seen. He says, do you understand that this is the only show that my wife Coretta and I will allow our little children to stay up and watch.
Uhura, of course, stayed on board the Enterprise, becoming an essential part of the show, movies, and related media. Though she accepted the unique fame that came from association with Star Trek, she was also capable of making light of it, as she did on the hilarious Futurama episode “Where No Fan Has Gone Before.”
Being an integral part of one of the most successful pop-culture franchises ever, and helping break down barriers of prejudice and misunderstanding between fellow earthlings — that’s quite a legacy, one we should expect to live long and prosper.
For years, Nichols also helped diversify the real-life space program, helping to recruit astronauts Sally Ride, Judith Resnik, Guion Bluford, and others. And she had her own science foundation, Women in Motion.
"Many actors become stars, but few stars can move a nation," tweeted actress Lynda Carter, who played Wonder Woman on TV in the 1970s. "Nichelle Nichols showed us the extraordinary power of Black women and paved the way for a better future for all women in media. Thank you, Nichelle. We will miss you."
George Takei, who costarred on Star Trek as helmsman Hikaru Sulu tweeted: "I shall have more to say about the trailblazing, incomparable Nichelle Nichols, who shared the bridge with us as Lt. Uhura of the USS Enterprise," her wrote. "For today, my heart is heavy, my eyes shining like the stars you now rest among, my dearest friend."
Posted by High Plains Pundit on August 01, 2022
Email ThisBlogThis!Share to TwitterShare to FacebookShare to Pinterest
Tags: National