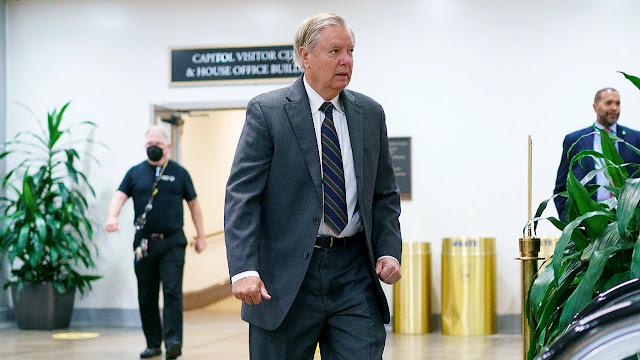 Republicans are sharpening their knives while the Senate prepares to hunker in for a long weekend as Democrats deploy a special process to pass the party’s sprawling health care, tax and climate plan without buy-in from across the aisle.
Republican leaders fumed over the Democratic effort at a press conference on Friday, one day before the Senate is prepared to begin consideration of the plan, while taking aim at Sens. Joe Manchin (D-W.Va.) and Kyrsten Sinema (D-Ariz.), two key centrist holdouts, for backing the effort.
“So, what will vote-a-rama be like?” Sen. Lindsey Graham (R-S.C) told reporters on Friday, referring to the voting marathon senators are set to be subjected to in the next few days as part of the process Democrats are using to pass the bill. “It’d be like hell.”
“They deserve this. As much as I admire Joe Manchin and Sinema for standing up to the radical left at times, they’re empowering legislation that will make the average person’s life more difficult,” Graham said.
Graham, along with Sen. Roger Marshall (R-Kan.), also threatened not to vote for a critical funding measure ahead of a September deadline, when government funding is set to lapse, over the effort.
Democrats are using a complicated procedure known as budget reconciliation to try to pass the party’s Inflation Reduction Act, a massive package that would advance key pieces of President Biden’s legislative agenda.
The procedure, which Republicans used to pass former President Trump’s signature tax law in 2017, will allow Democrats to pass a bill in the 50-50 Senate with a simple majority, bypassing the usual 60-vote threshold.
But to pass the bill using the maneuver, Democrats have to jump through a series of hoops before they bring the bill to the floor for a vote. That includes what’s known as vote-a-rama — an often lengthy and messy voting marathon in which senators can offer a series of amendments for a chance to influence legislation before a final vote on the overall bill.
Republicans have been strategizing in recent days on how to make Democrats feel as much pain as possible during the coming voting session, promising to line up tough votes for the party that could be used as ammunition for the coming campaign season.
During the recent press conference, Sen. John Barrasso (Wyo.), a member of Republican leadership, said the GOP will be focusing specifically on areas like “energy, inflation, border and crime.”
Many Republicans have been keeping their cards close to the vest on what amendments they plan to bring up during the voting marathon.
Republicans have expressed hopes at attaching some of their amendments to the overall bill, despite their overwhelming opposition to the package, in the event it could make the legislation tougher to pass in the House.
Still, there is concern among GOP members around the chances Democrats will introduce a “wraparound” amendment, which could allow for erasure of all amendments adopted during the session.
Sen. John Thune (S.D.), the No. 2 Senate Republican, acknowledged the issue during the press conference on Friday, questioning whether Manchin and Sinema would vote for such an amendment.
“Because they both said that they won’t vote after they felt like, in the American Rescue Plan, they voted for a wraparound amendment and felt like they were misled by their leadership at the time that they would never vote for one of those again,” Thune said.
National