Pelosi arrives in Taiwan amid tensions with China 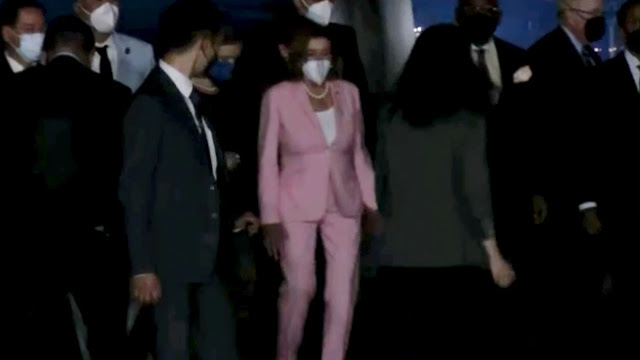 Speaker Nancy Pelosi (D-Calif.) arrived in Taiwan on Tuesday, capping off days of speculation regarding whether or not the third-highest official in the U.S. government would visit the self-governing island amid criticism from China.
Pelosi’s arrival in Taipei was broadcast on major television networks. It is her latest stop on a days-long trip to Asia with a congressional delegation.
The Speaker confirmed the visit in a statement shortly after she landed.
“Our Congressional delegation’s visit to Taiwan honors America’s unwavering commitment to supporting Taiwan’s vibrant Democracy,” Pelosi said in a statement.
“Our visit is part of our broader trip to the Indo-Pacific — including Singapore, Malaysia, South Korea and Japan — focused on mutual security, economic partnership and democratic governance.  Our discussions with Taiwan leadership will focus on reaffirming our support for our partner and on promoting our shared interests, including advancing a free and open Indo-Pacific region.  America’s solidarity with the 23 million people of Taiwan is more important today than ever, as the world faces a choice between autocracy and democracy,” she added.
Pelosi’s arrival in Taiwan came despite warnings from China urging the Speaker against traveling to the island.
Last month, Chinese Foreign Ministry spokesperson Zhao Lijian said a visit from Pelosi to Taiwan would “seriously violate” the “one-China” policy, adding that “China will take strong and resolute measures to safeguard its sovereignty and territorial integrity” if Pelosi ultimately visited.
Taiwan is not recognized as independent by China. Instead, Beijing views the self-governing island as territory that is waiting to be reunified with China.
Some in the Biden administration were also opposed to Pelosi visiting Taiwan. President Biden told reporters last month that the U.S. military “thinks it’s not a good idea right now” when asked about the Speaker’s possible visit to the territory.
In an op-ed published in The Washington Post right after she landed in Taiwan, Pelosi laid out why she led the congressional delegation to the territory.
“In the face of the Chinese Communist Party’s (CCP) accelerating aggression, our congressional delegation’s visit should be seen as an unequivocal statement that America stands with Taiwan, our democratic partner, as it defends itself and its freedom,” Pelosi wrote.
“We cannot stand by as the CCP proceeds to threaten Taiwan — and democracy itself,” she wrote.
“By traveling to Taiwan, we honor our commitment to democracy: reaffirming that the freedoms of Taiwan — and all democracies — must be respected,” she added.
Pelosi also noted that the visit “in no way contradicts the long-standing One China policy,” which is the U.S. position that acknowledges Taiwan as being part of China.
Pelosi is now the highest-ranking U.S. official to travel to Taiwan since 1997, when then-Speaker Newt Gingrich (R-Ga.) touched down in the territory. Pelosi previously visited Taiwan in 1999, but she was not a congressional leader at the time.
Pelosi on Tuesday was joined by a delegation of House Democrats including Foreign Affairs Chairman Gregory Meeks of New York, Veterans’ Affairs Chairman Mark Takano of California and Reps. Suzan DelBene of Washington state, Raja Krishnamoorthi of Illinois and Andy Kim of New Jersey.
The visit was quickly applauded by Pelosi’s Republican colleagues. In a statement issued right after she landed, a group of 26 GOP senators, including Minority Leader Mitch McConnell (Ky.), said they support the trip.
“We support Speaker of the House of Representatives Nancy Pelosi’s trip to Taiwan,” the group of Republicans wrote. “For decades, members of the United States Congress, including previous Speakers of the House, have travelled to Taiwan. This travel is consistent with the United States’ One China policy to which we are committed. We are also committed now, more than ever, to all elements of the Taiwan Relations Act.”
National World