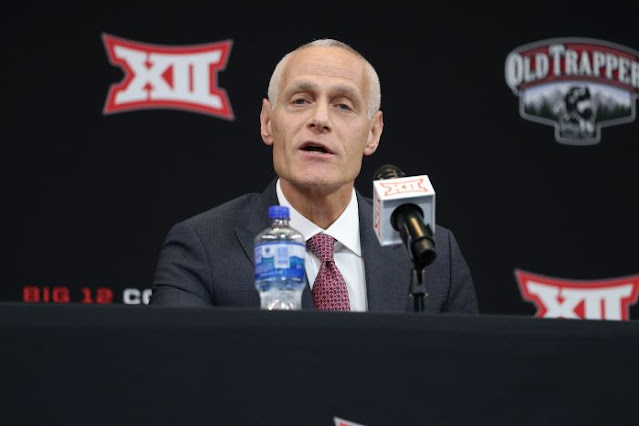 Brett Yormark has officially been the Big 12 commissioner since August 1, but his duties seemingly began a couple of weeks before that at Big 12 Media Days. There, he illustrated a strong mindset of expansion and building a more valuable brand for the Big 12, which is ultimately the final goal for a man in his position.
However, before he can build the brand that he is now responsible for, he must get to know what he is working with, and that is why he is visiting every campus in the Big 12, something he has dubbed “a listening tour.” While at each Big 12 university, Yormark will meet with the top officials, coaches, and support staff and learn a little bit about the history of each school.
After he visits all 14 schools that will be associated with this conference over the next few years, he will report back to the presidents of each school and set up a plan for moving forward.
During his stop in Lubbock this week, the Lubbock Avalanche-Journal sat down with Yormark for a short interview, which brought rise to some interesting comments concerning conference expansion and Yormark’s opinion on building the Big 12 brand. When asked about making the Big 12 a more national brand, this is what Yormark had to say.
“I think being more national means who we strategically align with,” Yormark told the Lubbock Avalanche-Journal. “Potential scheduling partnerships with other conferences, looking at some of our tentpole events and saying, do we do something more creatively with them from a location point of view? I think there’s lots of things we can do, and I’m exploring every and all option right now.”
Yormark was then asked about his “open for business” comments at Big 12 Media Days and how those were received.
“It’s been received, I think, in a very positive way,” Yormark said. “‘Open for business’ doesn’t mean just expansion, where I think some people read into it that it was very much focused on expansion. That’s not necessarily the case. When I say ‘open for business’, it means that this conference is no longer going to be stagnant. We’re going to be very proactive. We’re going to explore and identify any and all opportunities that create value in every respect. Is expansion a part of ‘open for business’? A hundred percent. But it’s only a small piece.”
Finally, when asked what his ideal number of members for the Big 12 was, Yormark danced around the question a bit but held strong on his “additive” view of expansion.
“I haven’t really looked at that the numbers,” Yormark said. “As I said during media day, it can’t be dilutive. It needs to be additive, and it comes down to making sure that we’re identifying the right strategic partners from a school perspective, and those that bring value to our conference. We’ll be at 12 in a couple of years when you add the four [Brigham Young, Central Florida, Cincinnati and Houston] and Texas and Oklahoma leave. If it’s 16 or 20 I can’t tell you, but we just have to make sure that whatever number it is, it’s all about the value equation.”
Yormark will be done with campus visits sometime in mid-September, but until then he has a lot to learn about what his new conference is like and how to surge forward, rather than being reactive like it has been in year’s past.
Posted by High Plains Pundit on August 20, 2022
Email ThisBlogThis!Share to TwitterShare to FacebookShare to Pinterest
Labels: Sports