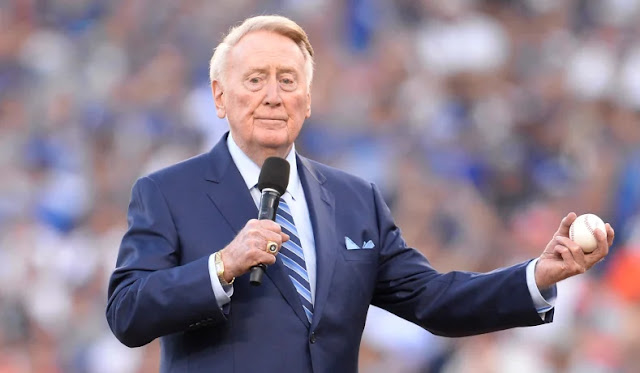 One of the most beloved voices in American sports broadcasting died Tuesday, August 2. Vin Scully was the radio voice of the Brooklyn Dodgers, and then moved with the team to Los Angeles in 1957, broadcasting on both radio and television. His tenure began in 1950 and ended in 2016, when he was 88 years old. It is by far the longest in sports history.
Of course, this career gave him a front row seat to the racial integration of baseball. You can listen to his call of the final three outs of Sandy Koufax’s perfect game on September 9, 1965. The mound, “the loneliest place in the world.”
There is his call of Kurt Gibson’s famous home run off Dennis Eckersly in 1988:  “In a year that has been so improbable . . . the impossible has happened!”
Scully also routinely was brought in to call playoff and World Series games that did not involve the Dodgers. See his call of Mookie Wilson’s hit past Bill Buckner in the 1986 World Series: “Little roller up along first. Behind the bag! It gets through Buckner! Here comes Knight, and the Mets win it!”
Even late in his broadcast life, well into his 80s, he was simply masterly. YouTube has a beautiful compilation of him calling every single out in Clayton Kershaw’s June 2014 no-hitter.
Scully prepared for his games, until the very end. What made him great was not just his genuinely lyrical sense for the game, or his lightly philosophical digressions, it was also his appreciation of his place in the entire soundscape of baseball. His voice would rise to ride on top of a crowd that was starting to froth. He would take the quiet moments of baseball and give simple — suspenseful — narration to what players on the field were doing to cope with their own nerves. Scully understood, like great musicians, the value of silence. Sometimes the noise of a ball snapping into leather, of a bat cracking, and a crowd roaring in exultation is poetry enough.
Scully had a devout but unshowy Catholic faith. He was a communicant at St. Jude the Apostle in Westlake Village, California. Though he often said he was richly blessed by God in life, it was was not a life untroubled. His first wife, Joan Crawford died of an accidental medical overdose in 1972 at age 35. He would later marry Sandra Hunt. His eldest son, Michael, died in a helicopter crash at the age of 33. Scully had four children, two stepchildren, 16 grandchildren, and three great-grandchildren. He was 94 years old.
For more than a half century, Vin Scully’s voice was carried through the golden and languorous evenings of Southern California, beaming in to the cars, and kitchens, and living rooms of millions of Dodgers fans. To describe this is to describe something like the genius and zenith of American civilization. With that voice, he made millions of Dodger fans and millions of others, his friends. How lucky were they and we to have had him so long as we did.
Sports