Biden administration: Just ignore that border wall we are building 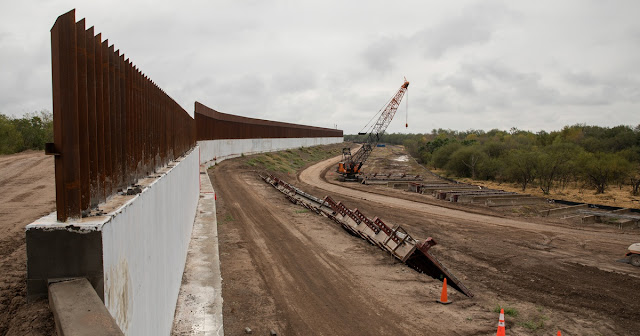 Facing an ongoing crisis at the southern border, the Biden administration is resorting to a Trump-era policy — building more of the wall. The administration is going to fill four gaps in the wall along Arizona’s border, near Yuma, which has experienced a surge in border crossings: Border Patrol has encountered 235,230 migrants attempting to cross the border at the Yuma Sector in fiscal year 2022. Only Del Rio and the Rio Grande Valley have encountered more migrants — 326,177 and 377,994, respectively.
Last Thursday, Department of Homeland Security secretary Alejandro Mayorkas authorized U.S. Customs and Border Patrol to conduct the Yuma Morelos Dam Project, sealing the gaps in the wall. According to the department, because of the area’s proximity to the Morelos Dam and Colorado River, the location “presents safety and life hazard risks for migrants attempting to cross into the United States where there is a risk of drownings and injuries from falls. This area also poses a life and safety risk to first responders and agents responding to incidents in this area.”
This is an interesting development, considering that candidate Biden vowed not to finish the wall as president. “There will not be another foot of wall constructed on my administration,” Biden proclaimed.
Fox News White House correspondent Peter Doocy grilled White House press secretary Karine Jean-Pierre on this reversal: “Why is the Biden administration building a border wall in Arizona?” Jean-Pierre denied that the Biden administration was finishing former president Trump’s border wall and blamed the Trump administration for the “mess”: “So, we are not finishing the wall, we are cleaning up the mess the prior administration left behind in their failed attempt to build a wall.” Doocy pressed Jean-Pierre: “But, President Biden when he was a candidate, said, ‘There will not be another foot of wall constructed in my administration.’ So, what changed?” Jean-Pierre replied, “We are not finishing the wall.” Doocy responded: “By finishing the wall . . . by filling in, is this racist? Because in 2019, when the former guy was proposing a wall, you said that it was his racist wall. So how is this any different?” Jean-Pierre responded, “A border wall is an ineffective use of taxpayer dollars.”
The Biden administration cannot admit that it was wrong, and that walls do in fact work — that would be conceding a major defeat and giving credit to the prior administration, which they can’t do. But the administration sees the numbers: As of July 18, 1,634,104 people have been encountered at the border in FY 2022. Almost 1.05 million illegal aliens have been released into the interior of the country as of June — more people than the population of Biden’s home state of Delaware. National Border Patrol Council president Brandon Judd suggests that the Biden administration’s move to fill in the gaps in the border wall near Yuma is a political move timed to help Senator Mark Kelly (D., Ariz.) in his tough reelection bid this November. Kelly’s office says he has been pushing to fill in those same gaps for months and that he secured a “commitment from the administration to get this done.”
Whether it is to help a Democrat, as Judd contends, or because the migrant crisis is destroying Biden’s approval numbers — or even because the administration realizes the crisis is harming the country — building the wall, possibly the symbol most closely associated with the Trump presidency, has returned. How ironic.
Posted by High Plains Pundit on August 03, 2022
Tags: National