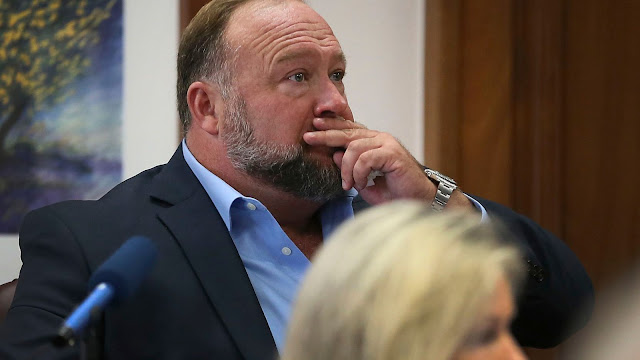 A Texas jury ordered conspiracy theorist Alex Jones to pay $45.2 million in punitive damages to the parents of a Sandy Hook Elementary School shooting victim on Friday, just one day after the jury decided on separate compensatory damages.
“I’ll take it!” the attorney for the parents Scarlett Lewis and Neil Heslin said after the figure was reached on Friday, according to The New York Times.
Lewis and Heslin, whose son Jesse Lewis was one of close to two dozen children who died in the shooting, sued Jones’s media company Free Speech Systems and the conspiracy theorist himself for defamation, according to The Associated Press.
A jury on Thursday ordered Jones, who has baselessly claimed that the 2012 school shooting was a hoax, to pay over $4 million in compensatory damages.
Jones has pushed false claims about the school shooting, including alleging that no children died in the massacre.
“I wanted to tell you to your face because I wanted you to know that I am a mother first and foremost. And I know that you are a father. And my son existed,” Lewis told Jones during the trial.
“And I don’t understand. Truth, truth is so vital to our world. Truth is what we base our reality on, and we have to agree on that to have a civil society. Sandy Hook is a hard truth. Hard truth. Nobody would want to ever believe that 26 kids could be murdered.”
“I unintentionally took part in things that did hurt these people’s feelings,” Jones said at one point in the trial, according to the AP.
National Texas