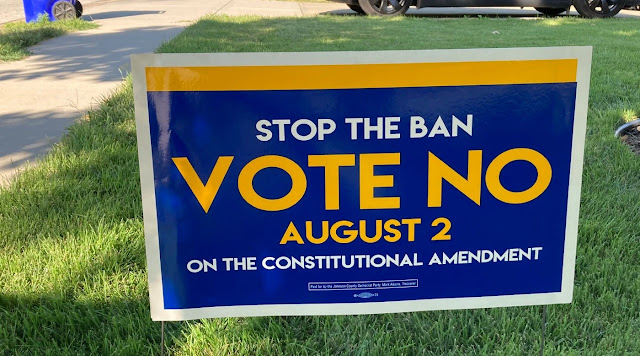 Kansas voters rejected a ballot measure Tuesday that would give the state legislature the authority to ban abortion, in what was seen as the first major referendum on the Supreme Court’s overturning of Roe v. Wade.
The ballot measure is a proposed state constitutional amendment that says the right to an abortion is not protected by the state constitution, effectively reversing a state Supreme Court decision from 2019.
But because the measure failed, that means that the state Supreme Court ruling still stands. Most abortions up until 22 weeks of pregnancy are allowed currently in the state.
The vote rejecting the ballot measure was lauded by Democrats and abortion rights advocates in and out of Kansas.
It’s no secret that Kansas is a red state, with more than 851,000 registered Republican and more than 495,000 registered Democrats, according to monthly data from the Kansas secretary of state’s office as of July.
Conservative pollster Kristen Soltis Anderson noted, however, that Kansas’ demographics are nuanced when it comes to the matter of abortion.
“With the Kansas abortion amendment vote, just a reminder that there are a sizable number of voters who: -consider themselves pro-life or who would support prohibiting abortion after 15 weeks and also believe Roe should be upheld,” Anderson​ said.
The lopsided result in the referendum is an illustration of first-mover advantage. Kansas is by no means a pro-life state, but it would probably never have adopted a sweeping abortion-protective constitutional amendment by popular vote. Once the state’s high court effectively amended the state constitution by itself, though, dislodging its mini-Roe by referendum became — as the result suggests – impossible.
That it didn’t work really shouldn’t be surprising. If we held national referenda, one on abolishing Roe in favor of some policy regime TBD would almost certainly have lost in most states. Pro-lifers by and large understood that the polls in favor of Roe didn’t mean Americans were deeply committed to an abortion regime as expansive as the one Roe actually entailed.
So here. The result is bad news, but supporters of the abortion license are giddily overreading it. The instant line is that the result shows that a backlash to Dobbs will be powerful this November. And it’s true that the referendum appears to have driven turnout in the state. This suggests to me a few potential advantages for pro-abortion Democrats this fall. They can do very well in places where a pro-life referendum is on the ballot, especially one that can be presented as effectively banning abortion without exceptions for pregnancies that result in rape; and maybe also in some places where legislators are on the verge of enacting such bans (or can be presented as being on the verge of it).
Will they be as successful in turning out their vote in the many places where those conditions are not present? Tuesday night’s result in Kansas will yield Democratic confidence about the answer to that question. It could turn out to be overconfidence.
And even in Kansas, I think pro-lifers ought to come back in a few years with another ballot initiative, this one establishing a gestational limit on abortion: at fifteen weeks, for example. There is no reason pro-lifers should take this deeply disappointing vote as the last word anywhere.
Posted by High Plains Pundit on August 02, 2022