A few thoughts on Andor 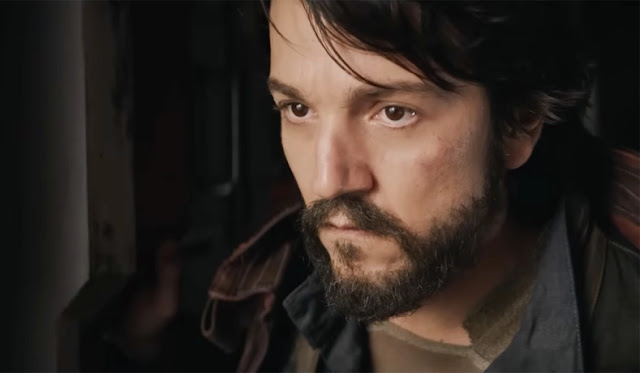 Yesterday, Lucasfilm released a new trailer for Andor, the next Star Wars series bound for Disney+:
Andor is a prequel to a prequel. Set between episodes III (Revenge of the Sith) and IV (A New Hope), and five years before the events of Rogue One (Episode 3.5, if you like), it will explore a perspective new to Star Wars: how different people and planets became part of the burgeoning rebellion against the Empire’s increasingly tight grip on the galaxy. The series promises to be filled with danger, deception, and intrigue, and to explore the journey that led Cassian Andor (Diego Luna) to become the rebel hero seen in Rogue One.
Andor will feature new (Stellan Skarsgaard as Luthen) and familiar faces (Forest Whittaker as Saw Gerrera, last seen in Rogue One but introduced in Star Wars Rebels) as supporting characters. The trailer promises plenty of gritty exploration of the reality of conflict. Just one dialogue exchange is revealing. The rebel veteran Gerrera says he is working “for the greater good.” Luthen responds, “Call it what you will.” To which Gerrera solemnly replies, “Let’s call it . . . war.”
Tony Gilroy — who was brought in for script-doctoring, reshoots, and editing on Rogue One — will lead the series as its showrunner. The studio seems confident in Gilroy’s Midas touch on this era of the franchise, as Andor received twelve episodes instead of the usual six or eight. A second season is already confirmed.
For a while, it felt like The Mandalorian was the top draw for new Disney+ subscribers, much like Stranger Things is for Netflix. But, after the less favorably received series The Book of Boba Fett and Obi-Wan Kenobi, it seems decision-makers at Disney are looking to Gilroy & Co. to shoulder a heavy burden in carrying one of the largest franchise’s live-action series. Even with the series in these seemingly capable hands, one question continues to percolate among loyal fans and skeptics alike: Why?
With each new property, Star Wars grapples with the problem of confusing its audience with what can or cannot be considered “canon.” After the original trilogy, Star Wars media exploded with animated shows like The Clone Wars, Rebels, The Bad Batch, and many more. Some of this media would eventually be considered canon to the greater universe, while others, like the original Thrawn book trilogy, were not.
This created a problem for Disney and Lucasfilm. Too much additional content could make Star Wars fandom overwhelming and complicated. This is why the franchise has stayed on so many pre- and post-Empire stories, trying to clarify exactly what happened during these crucial periods. While it is understandable, it has also impeded the franchise’s ability to grow. The most-common criticisms cited about focusing on these same parts of the timeline center around predictability and lack of universe expansion.
For instance, although fans and critics were thrilled to see Ewan McGregor and Hayden Christensen reprise their roles as Kenobi and Darth Vader, respectively, in Obi-Wan Kenobi, many critics wondered if it was necessary to revisit the two characters.
The Mandalorian avoided these issues by introducing new characters and putting most of its focus on the character of Mando and his relationship with the Child/Grogu. But even The Mandalorian, as brilliant as it is, still has the flaw that its events seem irrelevant to the larger universe. Moreover, even the new characters introduced outside the sequel trilogy have their origins tied to the Empire or the Rebellion in some fashion.
The problem with this approach is that these characters rely on events that we, the audience, have already seen play out, reducing the stakes and making all this content seem unoriginal. And that is a shame. These are dynamic, exciting characters who should be captivating audiences with ideas about what the Star Wars universe could contain, not what we know it already has.
The shows and movies could be free to explore all new galaxies and characters, examine the political upheaval following the fall of the First Order, and tackle stories of day-to-day life on distant planets, all without having to shoehorn in characters or a rebellion dynamic. The possibilities are endless.
Unfortunately, an exploration into such a story will have to wait. Until that day comes, all eyes now turn to Diego Luna and his costars to make the known entertaining. We’ll see if they succeed when the first three episodes of Andor premiere on Disney+ on September 21.
Posted by High Plains Pundit on August 02, 2022
Email ThisBlogThis!Share to TwitterShare to FacebookShare to Pinterest
Tags: National