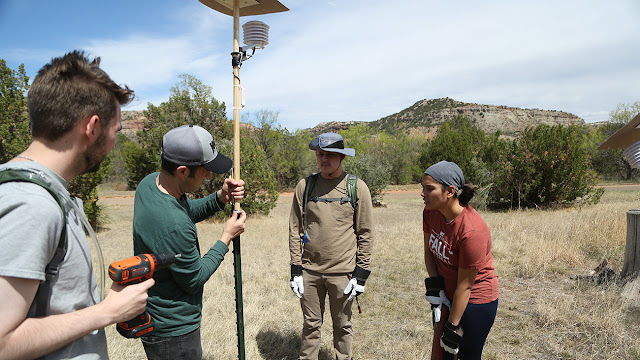 By Chip Chandler
With temperatures soaring in the Texas Panhandle, researchers with West Texas A&M University and the National Weather Service are continuing an impactful study on the hazards of extreme heat in Palo Duro Canyon State Park.
WT students helped install 24 temperature and humidity sensors on the floor and walls of the canyon in summer 2021, and preliminary observations appear to confirm the long-held belief that the canyon traps heat like an oven, sending temperatures on the canyon floor soaring 12 degrees higher than those in Amarillo.
Data collection continues this summer in an effort led by Dr. Erik Crosman, assistant professor of environmental science in WT’s Paul Engler College of Agriculture and Natural Sciences.
And summer 2022 is shaping up to be an exceptionally hot one.
Temperatures have topped 100 F in the canyon for all but one day in July thus far, with eight days already between 105 and 110 F. Park officials announced this month that they would temporarily close six trails between 11 a.m. and 5 p.m. on days when NWS issues heat advisories for the area.
The WT-led study bears out those decisions: The Lighthouse Trail, which is among those trails temporarily closing on extreme heat days, sees some of the hottest temperatures in the canyon, according to four weather stations installed along the four-mile trail.
This ongoing study is believed to be the first large-scale examination of the canyon’s climate. Two additional sensors used in the study were installed several years ago by Texas Tech University for its West Texas Mesonet project.
“We want to do everything we can to mitigate these impacts and help protect human life, and this heat study led by Dr. Crosman at WT is a great leap forward in doing this,” said Aaron Ward, NWS Amarillo science and operations officer. “I believe this PDC heat study will help us not only better understand why it gets so hot in the canyon, but the high-density observations also will help us determine exactly what areas see the most dangerous heat. This knowledge will give us better insight into what areas to avoid when we expect a hot weather pattern, and we can better communicate, understand and make adjustments to mitigate the associated hazards and risks.”
Crosman said he anticipates that the Summertime Canyon Observations and Research to Characterize Heat Extreme Regimes (or SCORCHER) study will develop a heat map of the canyon, which will be beneficial for public safety; that it will improve meteorologists’ ability to forecast the weather in and around the canyon; and that it could examine how the terrain and the dry line interact to trigger storms.
Area residents should be aware—but aren’t always—of how hot the canyon can get, but out-of-town visitors are frequently caught off-guard. Park rangers can assist 30 or more visitors per day suffering from heat-related illnesses.
Future analysis will compare the difference in temperature variations between wetter summers like 2021 and drier ones like this year.
Funding for the project comes from a collaborative $15,000 grant from the University Corporation for Atmospheric Research for WT and National Weather Service Amarillo.
Adriana Rademacher, a graduate student in environmental science from Splendora, presented preliminary findings from the study at the American Meteorological Society annual meeting in January. Cristan Campos, a junior environmental science major from Midland, and Tiffany Rooney, who graduated in May with a bachelor’s in environmental science, presented findings at The Texas A&M University System Pathways Student Research Symposium in March.
Local