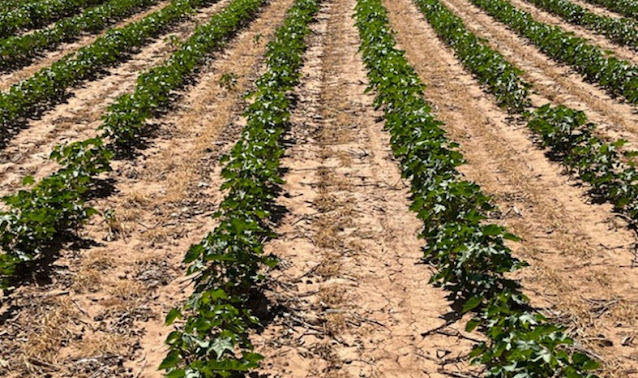 Triple digit temperatures and prolonged drought conditions are taking a toll on crops and livestock across the state, including cotton farmers on the South Plains of West Texas.
Lloyd Arthur grows dryland and irrigated cotton in Crosby County east of Lubbock.
“The dryland is beginning to suffer quite a bit, especially during the heat of the day. It’s different field by field and by stage (of growth of the cotton),” Arthur said.
But it’s not just the dryland crops suffering.
“Irrigated is similar. The drip fields under sub-surface irrigation seem to be holding up quite a bit better because there is not as much evaporation,” Arthur said. “Pivots are a different story. There are good, fair and not so good stands within each pivot itself. It’s very sporadic. So, it’s different between fields because of the day it was planted and what was happening the day it tried to emerge.”
From January to May 10 of this year, Arthur said there was basically no rainfall in his area.
Some rains began in the region on May 10. Arthur said it was about two inches that fell hard and fast to provide some moisture and hoped that other farmers could get some planting done.
Many area farmers saw decent stands of some of their cotton through the rest of May with a half inch to one inch of rain, Arthur noted.
The last measurable rainfall he recorded was an inch-and-a-half on June 3.
But now farmers are attempting to make the difficult decision of whether or not to continue irrigating their cotton crops, considering the extremely high input costs they are incurring.
“Our pumping costs out here are mainly electricity, but we do still have some natural gas pumps running,” he said. “Of course, those prices this year have doubled and tripled. That is weighing on all the farmers’ minds that the production costs are quite a bit higher than we have had in the past.”
Members of the Texas Alliance for Water Conservation were on a tour of Arthur’s farm on July 14. The group looked at crop conditions to determine irrigation strategies. And what a difference a year makes.
During Arthur’s presentation to the group, he said his records indicate that irrigation levels from Jan. 1 to July 14, 2021, showed that he had only applied an average of an inch to an inch-and-a-half of water to the crops that he usually irrigates. Comparing that to the same time frame this year, Arthur said he has applied, on average, in excess of six inches on most of his fields.
“That’s quite a difference of irrigation trying to establish the crop and keep it maintained for production. So, when you take those costs with inflated prices of energy that we are using to pump, it is weighing on everybody’s mind on how much further can they go,” he said. “People are trying to make day-to-day decisions, field-by-field on when to terminate irrigation or if the crop looks good enough to continue.”
Farm and Ranch Local