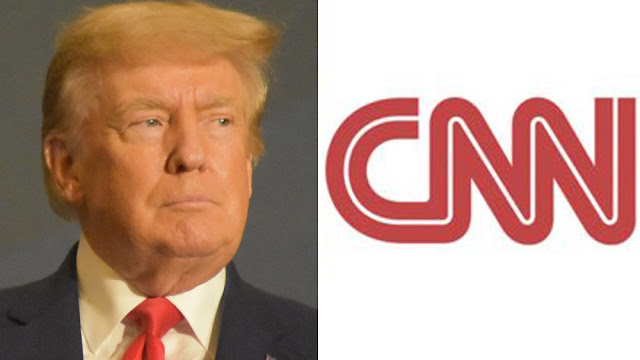 Former President Trump on Wednesday said he planned to file a lawsuit against CNN, alleging the network has repeatedly defamed him dating back to his 2016 campaign for the presidency.
“I have notified CNN of my intent to file a lawsuit over their repeated defamatory statements against me,” Trump said in a statement. “I will also be commencing actions against other media outlets who have defamed me and defrauded the public regarding the overwhelming evidence of fraud throughout the 2020 Election. I will never stop fighting for the truth and for the future of our Country!”
The 282-page letter from Trump’s attorneys to CNN executives, dated July 21, calls for the network to retract or correct numerous on-air statements and published articles about Trump that the lawyers allege are false and defamatory.
The letter goes on to cite dozens of examples, many of which relate to the network’s coverage of Trump’s repeated claims that the 2020 presidential election was fraudulent. CNN coverage frequently referred to those claims as “lies,” “false narratives” and “baseless theories,” among other terms.
The lawsuit alleges those descriptions are “false and defamatory,” in part because Trump genuinely believes his claims that the election was stolen.
“Without regard for President Trump’s genuine belief in his statements, CNN has published numerous articles characterizing him as a ‘liar’ and the purveyor of the ‘Big Lie,'” the letter to CNN states.
But perhaps in a preview of how Trump’s lawsuit is likely to be received, dozens of lawsuits filed after the 2020 alleging there was widespread fraud that tipped the scales in favor of Joe Biden were summarily dismissed because of a lack of evidence, in some cases by judges appointed by Trump.
Trump has spent the 18 months since leaving office continuing to claim the 2020 election was stolen or rigged against him, including as recently as Tuesday during a speech in Washington, D.C. Multiple audits and recounts have validated Biden’s victory, and many former Trump administration officials have said there was not enough fraud to change the outcome.
Many of the articles cited in the lawsuit are opinion or analysis pieces about Trump’s rhetoric after the 2020 election, in some cases tying that rhetoric to the attack on the Capitol on Jan. 6, 2021. Others are news articles documenting the frequency of his statements about election fraud.
The lawsuit also references commentary on CNN after the 2016 election by various Democrats who asserted Russian interference played a role in getting Trump elected. The intelligence community has established Russia interfered in that election.
Trump has a habit of threatening to sue those who speak critically of him, though he has rarely followed through in recent years.
He previously threatened to sue the women accusing him of sexual misconduct ahead of the 2016 election; he threatened to sue The New York Times over critical coverage; and he suggested he may sue Speaker Nancy Pelosi (D-Calif.) and Rep. Adam Schiff (D-Calif.) over comments before he was first impeached.
Trump has also previously argued the United States should change its libel laws to make it easier to sue the media and authors over their work.
Many other news outlets have routinely referred to Trump’s claims about the 2020 election as “baseless” or “lies,” but the former president has long feuded with CNN and its employees.
The network recently hired Chris Licht to replace Jeff Zucker as CEO. Licht reportedly told network anchors in a meeting last month that they should rein in the use of the phrase “the big lie” when referring to Trump’s election claims, worrying it was too partisan.
CNN declined to comment.
Posted by High Plains Pundit on July 27, 2022
Email ThisBlogThis!Share to TwitterShare to FacebookShare to Pinterest
Tags: National