The limitations of legislating an end to mass shootings 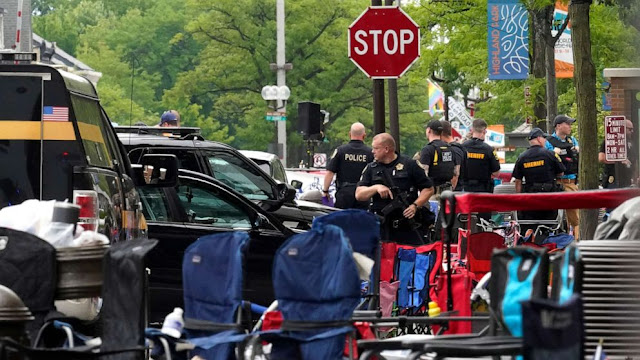 On Monday, in the city of Highland Park, Ill., a deranged goblin of a man opened fire on a July 4 parade, killing seven innocent people and wounding three dozen others. After an intense search, the culprit was apprehended and taken into custody. Yet again, a mass shooting has sullied America.
And, yet again, it is unclear what lawmakers can do to prevent the next one. Just weeks ago, the Senate passed a gun-control bill that Chris Murphy described as “the most significant piece of anti-gun violence legislation in nearly 30 years.” Today, posturing as if nothing has been done recently, Democrats are asking for more. But what, exactly, does that mean?
A red-flag law? Illinois already has one. A permitting system for the purchase and ownership of guns? Illinois has that, too. “Universal” background checks? That’s already Illinois law. What about “assault weapons” and “high-capacity” magazines? Highland Park has banned both since 2013. Concealed carry? That was prohibited at the parade under an Illinois law that renders it illegal to carry firearms at “any public gathering held pursuant to a license issued by any governmental body.” Straw purchasing? That’s already illegal, and, besides, the gun was obtained legally. Can the courts be blamed, perhaps? They cannot. In 2015, the Seventh Circuit upheld Highland Park’s ban on “assault weapons” and “high-capacity” magazines, and the Supreme Court then declined to take up the case. As for Heller, McDonald, and Bruen — thus far, nothing that has flowed from them even intersected with this case.
Because they are, relatively speaking, so rare and so unpredictable — and because America is so free — mass shootings remain one of the most intractable forms of crime. The ubiquity of firearms all but guarantees that a person who wishes to obtain one will do so before too long. The breadth of the First Amendment makes it tough to track threatening or unusual conversations. Absent a set of reforms that would gut the Fourth, Fifth, and Sixth Amendments, there is no way for American authorities to keep tabs on everyone who comes across as a little weird.
But if states are going to institute systems designed to keep guns out of the hands of dangerous people, it is not too much to ask that they use them. In the aftermath of almost every mass shooting, we learn that the suspect was “known to authorities” — which, in almost every case, means that the shooter was known to his community, too. And so it was here. The Highland Park shooter did not spring ex nihilo from the shadows; he repeatedly telegraphed his intentions. In one video, uploaded in August 2021, he foreshadowed his attack on the July 4 parade. In another, he dramatized a school shooting. In a third, he fantasized about getting into a shooting war with police. Per officials in the city, local cops had interacted with him twice in 2019 — once when he attempted suicide, and once when he threatened to “kill everyone” and had 16 knives, a dagger, and a sword confiscated as a result. Illinois has a broad “red flag” law in place, and it requires gun buyers to have a current permit. Why, we must ask, did these incidents not trigger prophylactic action?
We would put a similar question to the press. Study after study after study shows that mass shootings are highly “contagious,” and that, as NPR put it in 2019, “intensive media coverage seems to drive the contagion.” This is a free country, and its media must be free to act as they see fit. But perhaps they could see fit to take that into account? As of Tuesday afternoon, every major press outlet in the United States remains fixated upon the shooter. In our fame-drunk culture, this indulgence can be deleterious. A little less of it would be welcome. As a matter of course, we ask gun owners to be responsible, and we ask citizens to be vigilant. Is it too much to ask the press whether the need to squeeze a few extra clicks out of a story is worth the risk of encouraging the next shooter?
And beyond that? Beyond that, Americans would do well to set incidents such as this one in their proper context. Random acts of violence are, indeed, terrifying, but they are terrifying because they are so rare. When allocating our limited time and resources, we ought to remember that while the most spectacular criminals garner all the attention, a devastating attrition continues unabated in the background. On the day before the shooting in Highland Park, 15 people were killed in Chicago. Thus far in 2022, there have been 250 murders in Philadelphia, 175 murders in Los Angeles, and 102 murders in Washington, D.C. Bringing down those numbers will take hard work, intelligent policing, a willingness to enforce the laws already on the books, and a commitment to engaging with the problem in its most common form — and not just when it provides clicks, outrage, and a chance to poke one’s political enemies in the eye.
Posted by High Plains Pundit on July 06, 2022
Email ThisBlogThis!Share to TwitterShare to FacebookShare to Pinterest
Tags: National