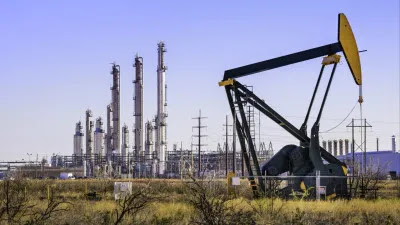 By Bethany Blankley
Texas is expecting a record surplus of nearly $27 billion for the 2022-23 biennium, Texas Comptroller Glenn Hegar says, largely made possible by the record amount of taxes the Texas oil and natural gas industry has contributed.
In a letter to state leadership, Hegar said the legislature will have $149.07 billion in General Revenue-related funds available for general-purpose spending for the 2022-23 biennium. This includes a projected fiscal 2023 ending balance of $26.95 billion in surplus, an increase of $14.95 billion from last November’s projected surplus.
He noted that the state’s Rainy Day Fund, (the Economic Stabilization Fund (ESF)) and State Highway Fund (SHF) will each receive $3.58 billion in transfers from the General Revenue Fund for severance taxes collected in fiscal 2022. After accounting for appropriations, investments and interest earnings, the ESF’s FY23 ending balance is expected to be a record $13.66 billion.
The ESF is funded almost exclusively by oil and natural gas severance taxes, which have now more than doubled by the amount it’s normally grown by having previously received more than $1.1 billion in severance taxes from the industry during the biennium equally split between the two funds.
"Comptroller Hegar’s increased revenue forecast means good news for Texans, and the oil and natural gas industry is a big factor in producing resources that are positively impacting our state,” Texas Oil and Gas Association president Todd Staples said. “This fiscal year the oil production tax is estimated to have grown by 91.8 percent, while the natural gas production tax is estimated to have grown by an eye-popping 266.8 percent.”
“Oil and natural gas is the only industry that pays severance taxes to the state – this industry and these funding streams are truly irreplaceable,” he added. “TXOGA members are committed to continuing both economic and environmental progress as we provide the indispensable fuel that powers modern life."
In June, the state collected the highest amount of monthly remittances from the Texas oil and gas industry in history, totaling over $1.12 billion. June’s remittances were greater than the average annual revenue from oil and natural gas production taxes of $1.01 billion just a few decades ago.
In FY2021, the industry paid $15.8 billion in state and local taxes and state royalties, more than $43 million a day. Both state royalties and production taxes increased by more than 20% and production taxes exceeded $5 billion for only the third time in history.
Also in FY2021, 98% of the state’s oil and natural gas royalties were deposited into the Permanent School Fund and the Permanent University Fund, which support Texas public education. The PUF received $979 million and the PSF received $1.099 billion.
In FY2021, Texas school districts also received $1.84 billion in property taxes from mineral properties producing oil and natural gas, pipelines, and gas utilities; counties received $640 million.
The industry’s FY2022 contributions are expected to exceed all of these tax and royalty totals.
Since 2007, when TXOGA first started compiling this data, the industry had paid more than $178.7 billion in state and local taxes and state royalties, including school property taxes, state production taxes, state and local sales taxes. They exclude hundreds of billions of dollars in payroll paid for some of the highest paying jobs in the state, taxes paid on office buildings and personal property, among others.
The industry is paying record amounts in taxes because it’s leading the U.S. in domestic oil and natural gas production.
If Texas were its own country, it would be the world’s third largest producer of natural gas and fourth largest producer of oil.
Increased production is made possible, in part, because the Texas Railroad Commission is issuing new leases and drilling permits. It’s doing so in contrast to the Biden administration’s prohibition of issuing new leases and permits on federal lands and waters, essentially halting production and increasing reliance on foreign production.
“Despite President [Joe] Biden’s delusional desire to transition away from fossil fuels, Comptroller Hegar’s announcement reinforces the fact that oil and gas literally fuels every facet of our lives from energy to food and beyond,” Railroad Commission Chairman Wayne Christian said. “In addition to paying record-breaking tax revenue which funds our schools, roads, first responders and more, Texas’ oil and gas industry is our economy’s lifeblood, supporting roughly one-third of our state’s economy and paying an average salary of $130,000. Oil and gas production is also so much more than simply fueling our energy use and funding our government, it produces about 96% of everyday consumer items including electricity, gasoline, plastics, medicine and countless others.”
Ed Longanecker, president of the Texas Independent Producers and Royalty Owners Association, said the data “once again illustrates the enormous economic contributions made by the Texas oil and natural gas industry. Instead of proposing anti-American energy policies, federal elected officials should work collaboratively with U.S. producers and develop a coherent strategy to unleash domestic production, including lifting restrictions on federal lands and waters, accelerating LNG exports and approving pending LNG applications."
Texas