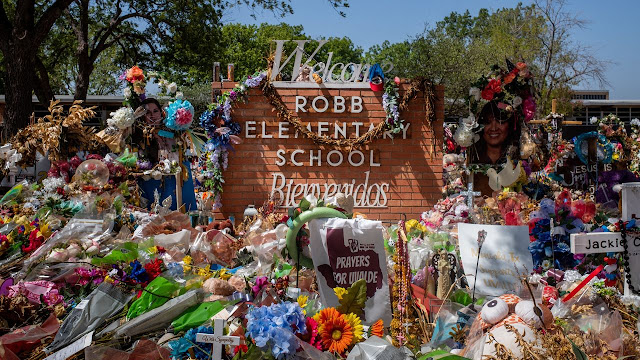 Texas officials are battling over whether to release key security camera footage related to the elementary schools shootings at Uvalde’s Robb Elementary School.
The contested video recording shows a hallway during the 77-minute period between the first 911 call reporting a gunman at the school, and the killing of the gunman by police, according to USA Today.
Nineteen children and two teachers were killed by the gunman. The response to the incident has raised serious questions if police waited too long before seeing to engage with the shooter.
The chairman of a Texas House panel investigating the mass shooting announced Monday that law enforcement and local officials would release the security camera footage from the May 24 shootings.
But the state’s Department of Public Safety (DPS) swiftly denied that an agreement had been reached to release the footage.
Now, the chairman, state Rep. Dustin Burrows, says he’ll release the footage himself, “regardless of any agreement.”
“It is my intention to show the hallway video to the people of Uvalde,” Burrows wrote on Twitter. “I will not release it to the public until the people of Uvalde have seen it for themselves.”
As many as 13 law enforcement officers were present in the hallway on tape during much of those 77 minutes, during which the shooter, 18-year-old Salvador Ramos, was behind a closed classroom door.
After Burrows announced Monday that an agreement on the footage had been reached, DPS Deputy Director Freeman Martin told ABC News that the department could not grant Burrows’ request for the tapes, per the guidance of Uvalde-area district attorney Christina Busbee.
Uvalde Mayor Don McLaughlin has expressed support for the release of the hallway video, and of body cam footage from police that day – accusing Busbee of withholding the recordings to protect law enforcement, according to ABC News.
The disputes over whether to release the footage dovetail with concerns about the law enforcement response to the shooting: a Customs and Border Patrol unit was allegedly told by police to wait and not enter the school, while the school district police chief reported that he didn’t know he was the officer in charge during the incident.
Burrows and the rest of the Texas House panel lawmakers are investigating these and other instances of police misconduct on the day of the shooting.
Texas