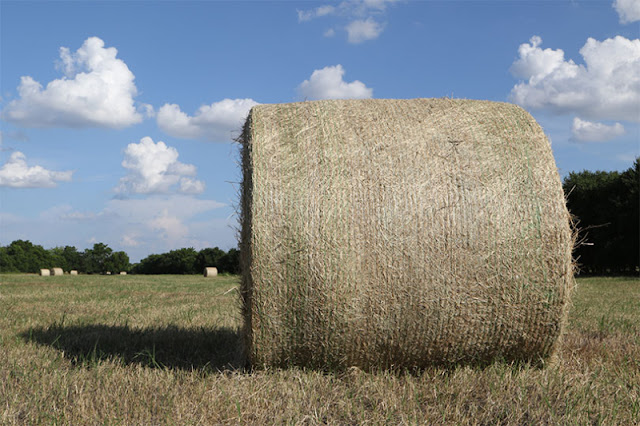 Texas hay production is down significantly due to widespread drought and high fertilizer prices.
Brad Fenley, chairman of Texas Farm Bureau’s Hay and Forage Advisory Committee, is a custom baler in Denton County. He has been baling both round and square bales since 1988.
“My production is probably off by two-thirds compared to a normal year,” he said. “I have a lot of small fields. What normally would’ve made 20 round bales would make five this year.”
The quantity and quality of hay is down, while the cost to produce the hay rose. Fenley said there has not been much growth since before last winter.
“The drought’s been really hard. We had a dry winter, so we had no winter grasses, and it’s been a dry spring,” he said. “So, the grass hasn’t produced. I’m not getting to bale as much hay, and the folks are having to find alternative sources for hay.”
Early June brought rain, but it didn’t have a significant impact. And continued drought conditions have led to some ranchers drilling water wells for irrigation, an alternative Fenley said would not be a long-term solution when compared to rainwater.
“Really, it’s hard to plan when you don’t have something that’s provided by nature—rain,” he said. “I’ve known some folks who have drilled water wells that the grass just didn’t respond like it does to rainwater. I really don’t know what we’re going to do. It’s going to be tough.”
Drought has not been the only challenge present this summer.
Skyrocketing fertilizer prices and other rising costs for farm inputs, plus supply chain issues, have growers and custom balers and harvesters evaluating prices.
“There are some costs you just have to pass on, and (customers) are aware of those also, because they’re in the same boat,” Fenley said. “I had to raise my prices as everybody else had to. Your input costs are higher and trying to find parts for equipment can be difficult right now.”
Manage forages, pastures
Farmers and ranchers should make decisions regarding stockpiled forages and hay supplies, planning for ways to stretch available nutrition.
“Hay production conditions are better in the eastern part of the state, but they’re still not great,” Tracy Tomascik, Texas Farm Bureau associate director of Commodity and Regulatory Activities, said. “When purchasing hay or growing your own hay, it’s important to test the bales for nutritional value, especially this year.”
The nutritional value of the hay will help ranchers better determine what additional supplementation is needed.
“Farmers and ranchers are seeing major crop loss and forage loss from widespread drought conditions,” Tomascik said. “Hay production and pasture conditions are bleak. All of Texas needs several good soaking rains.”
With the continued dry conditions, there is elevated risk for wildfires.
More than 210 counties are currently under a burn ban, and Texas A&M Forest Service officials note the dry vegetation could lead to more wildfire activity across the state.
Farm and Ranch