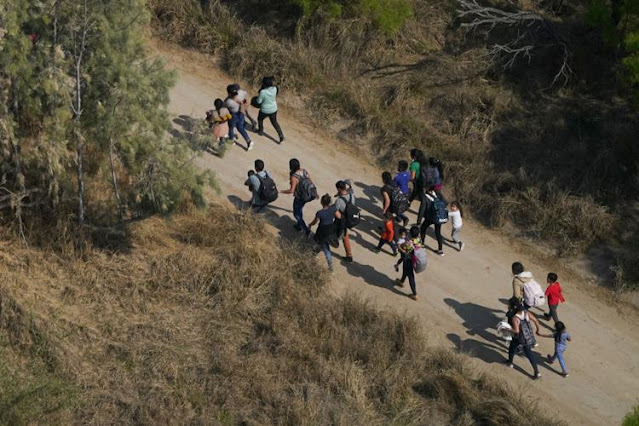 By Bethany Blankley
Texas Attorney General Ken Paxton won’t be issuing a legal opinion declaring an invasion at the southern border, First Attorney General Brent Webster said.
That decision is “shortsighted,” a Navy JAG attorney and national security law expert said, and Webster's reasoning for not doing so is inaccurate.
Webster’s remarks came after at least eight Texas counties declared an invasion this month. More are expected to do so. Many conservatives have called on Paxton for over a year to issue an invasion opinion.
During a panel discussion at an America First Policy Institute summit in Washington, D.C., Webster said, “AG Paxton has publicly acknowledged that if you look at the definition of invasion, this is an invasion. But what it’s not is it’s not a foreign uniformed entity invading our country. It’s not the Mexican army invading our country. You have to look at the complexity of the issue.
“We have been asked for our opinion and we decided this is going to end up in litigation so we’re not going to issue an opinion.”
Jonathan Hullihan, an officer in the Navy Judge Advocate General’s Corps and a leading authority in international and national security law, said that he “respectfully disagrees” with Webster’s “conclusory and shortsighted opinion.”
Texas has a constitutionally granted legal right to declare and repel an invasion from non-state actors, he said. For Webster to suggest that declaring an invasion requires “a foreign uniformed entity” indicates that he has a misunderstanding of the law, Hullihan added.
It’s also well-documented that the Mexican cartels are engaging in nontraditional warfare and aren’t operating independently from the Mexican government, according to numerous reports by U.S. intelligence agencies.
“As a uniformed lawyer in the Navy JAGC that spent most of my career in Operational Law, International Law, and National Security law, often the most complex facts and legal analysis relate to distinguishing, targeting, and use of force against non-state actors. To this point, the southern border is not simply an immigration and naturalization issue, but rather an issue of national and state security,” Hullihan said.
“The state of Texas has a right and an obligation to act within the framework of the Constitution to protect its citizens from the destabilizing effects of the non-state actors, transnational criminal organizations, and the dramatic escalation of narco-terrorism that is exported and operating freely into the United States.”
Hullihan has served as legal counsel and advisor to Navy SEAL teams, Special Operations units in the United States Central Command (USCENTCOM) theater of operations, among other roles. He's now the lead attorney for Texas for the nonprofit County Citizens Defending Freedom, CCDF-USA.
He points to Arizona Attorney General Mark Brnovich’s opinion issued in February, arguing it was “the correct Constitutional analysis.” Brnovich specifically argued that “non-state actors may constitute an invasion, particularly when the invasion uses asymmetrical warfare tactics and strategy carried out by non-state actors with complex command and control networks. These networks are funded and carry out operations to achieve the desired effects of human trafficking, moving illicit opioids like fentanyl within their supply chains, and use all methods and means of irregular warfare to achieve their operational goals.”
“The on-the-ground violence and lawlessness at Arizona’s border caused by cartels and gangs is extensive, well-documented, and persistent. It can satisfy the definition of ‘actually invaded’ and ‘invasion’ under the U.S. Constitution,” Brnovich’s opinion states. “The federal government is failing to fulfill its duty under Article IV, Section 4 of the Constitution to defend the States from invasion. The State Self-Defense Clause exists precisely for situations such as the present, to ensure that states are not left helpless.”
Webster also said the “invaders are working with the federal government,” which “raises questions I don’t think a lot of people want to deal with right now.”
Longtime Democratic border county judges disagree. They were among the first to declare an invasion and are now running for reelection as Republicans. Kinney County Attorney Brent Smith, whose county was the first to declare an invasion, maintains that Texas as a sovereign state has the constitutional right to defend its own border.
Texas Gov. Greg Abbott has also yet to declare an invasion, instead taking unprecedented action to thwart criminal activity coming from the Texas-Mexico border.
More than 2 million people from over 150 countries have been apprehended illegally entering the U.S. since President Joe Biden took office. Another million are estimated to have evaded capture illegally entering the U.S. unrelated to immigration whose whereabouts are unknown. Border Patrol agents have seized enough lethal doses of fentanyl coming through the southern border to potentially kill 2.5 billion people, excluding the amounts seized by state and local law enforcement. These factors threaten the lives of Texans and Americans, the judges who’ve declared an invasion argue.
“Until the state of Texas properly recognizes the threat and Constitutional framework available to protect our citizens, I am not confident that we will solve this problem. In fact, it will only get worse,” Hullihan said.
Texas