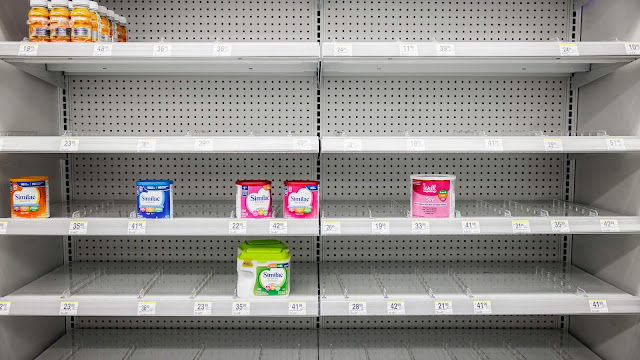 What ever happened to that baby formula shortage that was dominating the headlines last month? I can barely recall the last time I saw a story about it on cable news. After Abbott reopened their plant in Michigan at the same time that Joe Biden was flying in planeloads of the mixture from Europe, it seems as if everyone felt like the crisis had passed and moved on with their lives. That’s really not the case at all.
So what’s going on?
The ongoing shortage of baby formula across the United States has become more acute in recent weeks, despite the Biden administration flying in millions of bottles worth of formula from across the world over the past two months.
According to the market research firm IRI, 28.3% of powdered baby formula products were out of stock at US stores for the week ending July 10 — a higher percentage than the 23.7% reported out of stock for the week ending May 22, when the shortage dominated headlines.
The most recent availability figure was a slight improvement from the previous week, when the out-of-stock percentage stood at 29.5%, the highest figure so far this year.
This is a challenge with multiple layers to it and there was never going to be a magic wand that would make it go away overnight. The Abbot plant is back in operation, but it’s only coming online in fits and starts. It won’t be back to 100% production for a while yet and even then it will take weeks to catch up to the outstanding levels of demand.
In the meantime, Biden’s Operation Fly Formula was never much more than a bandaid on a far larger problem. We’ve managed to fly in millions of bottles worth of foreign formula, but that was still nowhere close to the total demand in the United States. So people are making do with whatever brands they’re able to find on the shelves, assuming they can find any at all in their local outlets.
But the incoming supply has already started to increase, so why aren’t the shortages easing at the same pace? According to the industry analyst, that answer is also complicated. They blame part of the issue on consumers who are hoarding formula, and for once that answer may be at least partially true. When it comes down to ensuring that your baby will be able to eat, mothers will do what needs to be done. When new supplies show up on the shelves, those with the money to do so will buy as much as they can carry. If the stores seek to put limits on how many can be purchased, other family members will be sent in to buy more. It’s human nature.
Unfortunately, not all baby formula products are created equal. Most families have a favorite that they rely on and know the baby will be able to tolerate. Switching brands can cause issues.
Sadly, the underlying cause of this crisis goes far deeper than all of that and would be much harder to address. We’re dealing with supply chain issues yet again, combined with the fact that there is so little competition in this market domestically. There are only a handful of plants in the United States producing baby formula and they are run by just three or four companies. When one of them goes offline entirely for any reason, the impact will be rapid and intense as we’ve seen this year. Also, even when they get back to full production levels, the ongoing shortage of both truck drivers and diesel fuel makes the task of fully restocking the nation’s store shelves even more complicated.
How do we address those issues? The delivery problem should be dropped in the lap of the country’s transportation chief, but Mayor Pete seems to be a bit busy these days. As to the low number of manufacturers producing formula, that’s just an intractable product of the free market. We can encourage other companies to try to enter the field, but that’s far easier said than done.
Posted by High Plains Pundit on July 19, 2022
Email ThisBlogThis!Share to TwitterShare to FacebookShare to Pinterest
Tags: National