Pay for what, Mr. President? 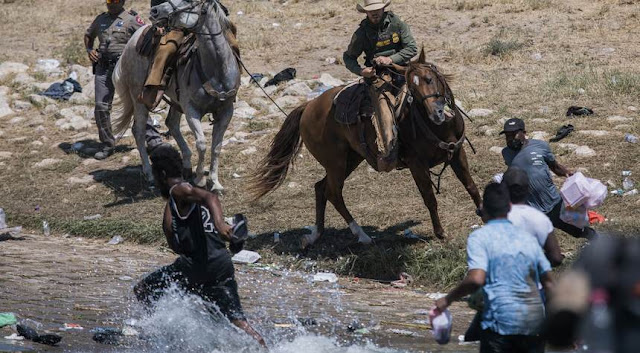 After more than 9 months of investigation, Customs and Border Patrol has finally released a 500 page report on the incident in which migrants in Del Rio, Texas were allegedly “whipped” by agents on horseback. The report concludes that no whipping took place, none at all. That’s contrary to what everyone from the president on down was saying at the time.
Biden condemned the agents last year amid public outcry at the scene of horses charging at families and small children running out of the way.
“It’s horrible, what you saw. To see people like they did, with horses, running them over, people being strapped, it’s outrageous,” Biden said at the time. “Those people will pay,” he said, referring to the agents. “There is an investigation underway right now, and there will be consequences.”
Vice President Harris echoed those comments in an appearance on ABC’s “The View,” saying the scenes “evoked images of some of the worst moments of our history, where that kind of behavior has been used against the indigenous people of our country, has been used against African Americans during times of slavery.”…
CBP Commissioner Chris Magnus told reporters that the statements from Biden and Harris did not prejudice the outcome of the investigation. “I don’t believe there’s been any issues with outside influence,” said Magnus, who said he told investigators to disregard “anything they heard outside of their own work.”
Sure, I guess the fact that the president and vice president had already prejudged the case and demanded punishment had no impact at all. That’s why you have this report which concludes nothing really happened but that people need to be disciplined anyway.
The investigative findings show that the agency failed to appropriately task, supervise, and exercise command and control over the Horse Patrol Units in Del Rio on September 19, 2021. Several Border Patrol Agents used force or the threat of force to attempt to drive migrants back into the Rio Grande River towards the U.S.-Mexico border, though there is no evidence that any migrants were forced to return to Mexico or denied entry to the United States. Additionally, the Office of Professional Responsibility found multiple instances in which Agents acted inappropriately during the incident, including one Border Patrol Agent who was found to have used denigrating and inappropriate language and to have maneuvered his horse unsafely near a child.
One Border Patrol Agent acted in an unprofessional manner by yelling denigrating comments regarding a migrant’s national origin and sex, stating in part, “Hey! You use your women? This is why your country’s s***, you use your women for this.”
The same Border Patrol Agent acted in an unsafe manner by forcing his horse to narrowly maneuver around a small child on a slanted concrete ramp.
There is no evidence that Border Patrol Agents involved in this incident struck, intentionally or otherwise, any person with their reins.
Several mounted Border Patrol Agents used force or the threat of force to drive several migrants back into the Rio Grande River, despite the fact the migrants were well within the territorial boundary of the United States.
Despite the actions taken by the Border Patrol Agents during this incident, there was no evidence found during this investigation to suggest any migrant was ultimately forced to return to Mexico or denied entry into the United States.
So that’s it. No one was whipped. No one was forced back across the Mexico border. At the end of the day you have a 9-month investigation and a 500 page report that found one agent used some harsh language and precisely zero people were harmed. And, miraculously, that minor verbal infraction is the lead bullet point while the repudiation of all the claims initially made about this incident, i.e. people were whipped like slaves!, gets buried and minimized.
Again, it’s hard to believe the fact that the president and vice president had already judged the case and promised punishment has nothing to do with how this is being framed. “I promise you those people will pay,” Biden said. Pay for what, Mr. President?
Opinion