No chance Mike Pence will be elected president 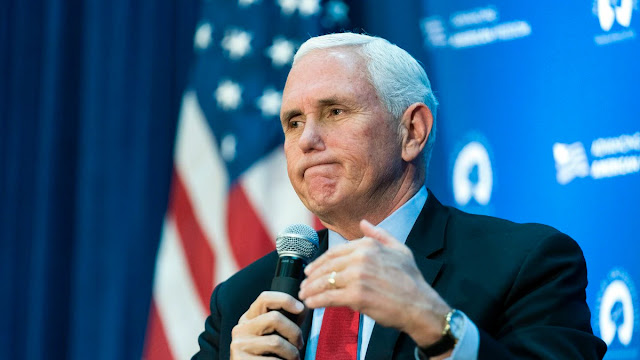 Mike Pence is not going to be elected president of the United States.
After serving a heartbeat away from the presidency, it’s natural to regard any vice president as a strong contender for the top job. It’s also dangerous to make definitive electoral projections in uncertain political times.
But there simply isn’t a viable path to the Oval Office for Pence.
You wouldn’t necessarily know it by media coverage that highlights primary races in which Pence backs one candidate and former President Donald Trump backs another as though they were meaningful battles in the war for leadership of the Republican Party.
One of the biggest examples was earlier this year in Georgia’s gubernatorial primary.
“In Georgia, the Brian Kemp-David Perdue primary has turned into a Donald Trump-Mike Pence feud,” according to a USA Today headline. “Georgia primary pits Pence-endorsed Brian Kemp against Trump-backed David Perdue,” according to CBS News. “Trump and Pence take separate sides in Georgia’s governor primary,” headlined The Washington Post. “The Georgia GOP Primary is Turning into a Trump-Pence Proxy War,” according to Vanity Fair.
Pence was more than willing to play along.
"When you say yes to Gov. Brian Kemp tomorrow, you will send a deafening message all across America that the Republican Party is the party of the future," said Pence at a rally the day before the May primary.
And yet, Kemp’s rout of Perdue had no measurable impact on the 2024 race. Kemp defeated Perdue by more than 50 points (74 percent to 22 percent), but Pence is doing only as well or worse in hypothetical polling about the 2024 presidential nomination race.
A couple of months before the Georgia primary, a March 18-20 poll of registered voters by Morning Consult showed Pence in third place with 10 percent, putting him behind Trump (54 percent) and Florida Gov. Ron DeSantis (14 percent). A more recent Morning Consult survey, from July 15-17, showed Pence in third place with 7 percent, behind Trump (53 percent) and DeSantis (23 percent).
An April 18-20 poll (before Georgia) by Echelon Insights showed DeSantis leading Pence 34 percent to 14 percent in a field without Trump. A more recent July 15-18 survey by the same firm showed DeSantis with a 42 percent to 12 percent advantage.
Presidential primary polls taken two years out from an election have limited predictive power, particularly when they don’t capture the totality of the candidate field. But it’s at least some quantitative measure of where potential candidates fit in GOP primary voters’ hearts and minds right now.
A July 5-7 poll of likely 2024 GOP primary voters by Siena College for The New York Times Upshot had Pence tied with former South Carolina Gov. Nikki Haley for fourth place with 6 percent, landing them well behind Trump (49 percent) and DeSantis (25 percent) and almost even with Texas Sen. Ted Cruz (7 percent).
Even though Pence has nearly universal name ID among Republicans, there just isn’t an appetite for the former vice president in the Republican Party right now. The former Indiana congressman has lost credibility with both factions of today’s GOP.
To the many Republicans who still view Trump favorably, Pence committed the unpardonable sin on Jan. 6, 2021, by accepting certified electors in the 2020 presidential election. Some Trump supporters literally wanted to hang him.
Meanwhile, some Republicans who boarded the Trump train because of Pence have subsequently shifted their allegiance to Trump. And for those who appreciated Pence’s more steady, less provocative approach during the Trump administration, there will be other candidates who provide that and more in a future race.
To the even much smaller group of never-Trump Republicans, Pence is essentially a nonstarter because he helped Trump get elected and carried the president’s water as vice president for four years.
Even though Pence shared a ticket with Trump and was Trump’s vice president, he is better suited to lead the pre-Trump Republican Party. Pence is more of a culture warrior than a MAGA warrior. He can be solidly conservative on policy but doesn’t have the personality, charisma and fighting mentality that many GOP voters are attracted to right now.
Pence-backed and Trump-backed candidates are scheduled to face off once again in the Arizona primary for governor on Aug. 2. But even if Pence’s Karrin Taylor Robson prevails over Trump’s Kari Lake, be skeptical that it signals a dramatic shift toward the former vice president within the party — or that it’s evidence of traction toward getting elected president.
Opinion