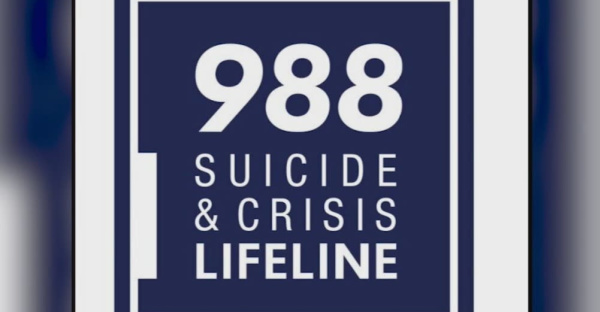 Beginning Saturday, any American experiencing a mental health crisis can call or text 988, the new National Suicide Prevention Hotline that’s been years in the making. The federal government has invested millions of dollars in preparation for 988’s launch and is relying on states to help make the new service a success.
Over 200 locally operated and funded crisis centers across the country will begin operating 24/7, responding to 988 calls and text messages in an attempt to reimagine crisis response in the U.S. Callers will first be routed to the National Suicide Prevention Lifeline and then connected to a local crisis counselor where they can receive counseling, resources and referrals.
Where locally available, there will also be mobile crisis units on deck for dispatch.
Anyone can use 988 that needs support for a suicidal, mental health and/or substance use crisis by either calling or texting the new three-digit lifeline. An online chat will also be available through the Lifeline’s website.
The new three-digit line is attempting a person-centered approach to mental health care, offering live assistance through a trained crisis counselor who can promote stabilization and care in the least restrictive setting possible. The Substance Abuse and Mental Health Agency (SAMHSA) says that currently fewer than 2 percent of Lifeline calls require emergency services like 911.
988 is also an effort aimed to reign in the country’s mental health crisis, as the Centers for Disease Control and Prevention (CDC) estimates that the US experienced one death by suicide every 11 minutes in 2020, making it the second leading cause of death for young people.
The Kaiser Family Foundation (KFF) also calculated that as of 2009, the number of suicides occurring in the U.S. outnumbered those caused by motor vehicle accidents.
The National Suicide Prevention Lifeline experienced the crisis firsthand, receiving 3.6 million phone calls, chats and texts combined in 2021 — and that number is expected to at least double within the first full year after the 988 transition.
The federal government has signaled it’s serious about investing in Americans’ mental health care, with HHS investing $432 million in mental health outreach — with $105 million going to states and territories to use towards scaling up 988, like increasing staffing at local crisis call centers.
The success of 988 is contingent on the strong engagement and participation of states and local partners, with HHS officials telling Changing America that the July 16 launch date is only the beginning and that a lot of work remains to be done to strengthen the service and truly transform the crisis care continuum in the U.S.
“988 is more than a number, it is a message: we’re there for you. Through this and other actions, we are treating mental health as a priority and putting crisis care in reach for more Americans,” said Secretary Becerra, in a statement.
“There is still much work to do. But what matters is that we’re launching, 988 will be live. We are looking to every governor and every state in the nation to do their part to make this a long-term success.”
However, the National Academy for State Health Policy (NASHP), which has been tracking local legislation related to 988, found that so far only 21 states have enacted legislation necessary for implementation — like instating telecommunication charges, funding schemas and integrating existing crisis call systems with 988.
Like Washington state, which enacted legislation last year that added a 24-cent fee per line to residents’ monthly phone bill in order to fund 988. The fee is expected to bring in about $46 million annually to cover the cost of expanding the state’s suicide call center.
That still leaves over two dozen states that have not introduced any legislation that addresses 988, despite a federal mandate.
Yet, HHS officials remain hopeful, reiterating that it took the U.S. over five decades to grow 911 into the effective emergency response process it is today and that 988 is poised for a much faster transformation.
If you or someone you know is struggling or in crisis, help is available. Call or text 988 or chat 988.lifeline.org.
Posted by High Plains Pundit on July 15, 2022
Email ThisBlogThis!Share to TwitterShare to FacebookShare to Pinterest
Tags: National