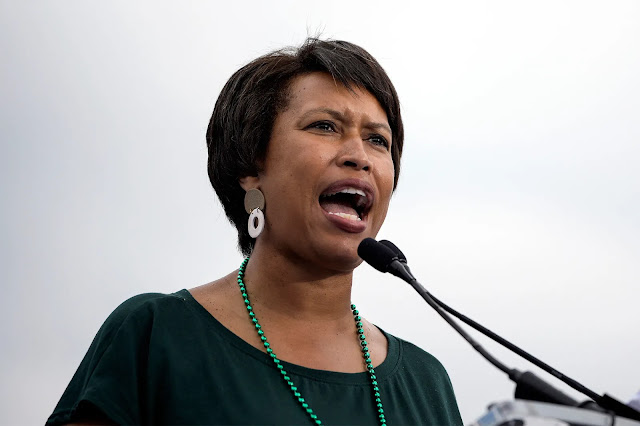 Last week we saw Mayor Eric Adams of New York complaining about what a burden the newly arrived migrants who were taking up the city’s homeless beds. Today, Mayor Bowser of Washington, DC announced she had requested federal help with the same problem. Specifically, she wants the National Guard to get involved to help manage the influx of migrants arriving on buses from Texas and Arizona.
The request also seeks permission to use the D.C. Armory, a multipurpose arena located east of the Capitol Building, as a processing center, as more than 150 buses traveling from Arizona and Texas have transported nearly 4,000 migrants to the nation’s capital over the past three months.
“The pace of arriving buses and the volume of arrivals have reached tipping points,” Bowser wrote. “Our collective response and service efforts have now become overwhelmed. Tragically, many families arrive in Washington, DC with nowhere to go, or they remain in limbo seeking onward destinations across the United States.”
As you probably already know, the backstory here is that both Texas and Arizona have been busing migrants who cross the border claiming asylum to Washington, DC (and to New York) since April. The idea was that if President Biden refused to come to the border to see the problem, Governors Abbott and Ducey would send the problem somewhere he could see it up close. Today, both Abbott and Ducey were quick to sympathize with Mayor Bowser but also to point out that what DC is experiencing is a small fraction of what Texas and Arizona are dealing with.
Gov. Ducey also noted the number of migrants bused to DC this far is about 10% of the number of migrant encounters Arizona’s border saw last month alone.
Naturally, not everyone is pleased that Mayor Bowser is essentially echoing the red state governors who are sending the migrants. This group which has been helping respond to the influx wrote, “Mayor Bowser is emboldening the xenophobia and cruelty of Governor Abbott. Instead of recognizing that the DC community has responded beautifully in recent weeks to show that a community response is possible, she’s choosing to further traumatize people arriving to DC after fleeing for their lives with a militarized response.”
But the truth is the local response has been overwhelmed by the numbers which is why Bowser is demanding federal help. DCist profiled some of the people who formed the impromptu welcoming committee for the migrants.
Organizers say they’re frustrated that so much of this potentially life-saving work is falling entirely on them and a few nonprofits, and believe that the D.C. government should be doing more. The mayor’s team did not respond to requests for comment.
“If the groups had not sprung to action to greet people as they were being dumped out of buses by Governor Abbott onto the side of the street, we would be facing a humanitarian crisis of proportions I can’t even think about,” Felix Macaraeg added.
This dynamic played out on a recent Thursday night when Nee Nee Taylor, another core organizer and co-founder of Harriet’s Wildest Dreams, quickly secured hotel rooms for roughly two dozen migrants because neither the local chapter of CARECEN or the government provided housing accommodations.
The group of migrants, which included several children and a pregnant woman, had unexpectedly arrived at Union Station at 9:30 p.m. Kate Brooke-Davidson of CARECEN says their nonprofit had already provided hotel rooms for migrants who arrived on three other buses earlier that day, and couldn’t support any more people due to fiscal and staff constraints. Instead, they were going to offer the new arrivals sleeping bags as they stayed overnight at the station’s waiting area. Brooke-Davidson says her group reached out to the Bowser administration for assistance, and was instructed to connect migrants to homeless shelters.
“It’s inhumane,” Taylor repeated to herself throughout the night, as she called and texted people in search of a solution.
Even with all of this local effort a lot of people fall through the cracks. Shepard Smith recently ran a report about migrants dropped off by buses who were left dozing in a nearby park because they had nowhere else to go. The tone of this piece is outrage. How dare Gov. Abbott send these people somewhere with no plan for helping them. “We don not have the ability to sustain this,” one aid worker said.
What the story overlooks is that 90% of the migrants arriving in Texas are still in Texas and there’s no easy solution for them either. The problem isn’t that they were dropped off in DC with no plan, the problem is that they’ve all dropped themselves off in America with no plan.
These are mostly economic migrants looking for a better life. But there’s just no way to easily accommodate 3,000 new arrivals per day. As I’ve pointed out before, more people were encountered at the border last fiscal year than the population of 11 states. So having fewer people arrive at the border to game our asylum system would be a big improvement, but DC and the border states can’t make changes to the immigration system. Only Congress and the Biden administration can do that.
Busing these migrants to DC was a stroke of genius and Govs. Abbott and Ducey should keep it up. It’s easy for liberals in Congress to look down their noses at the red states that are actually struggling under the burden of this problem. It’s much harder to be smug about it when even a fraction of the problem is arriving at your own doorstep every day. Unfortunately, the media continues to give Biden himself a pass, barely reporting the news and never holding him accountable for what’s happening.
Opinion