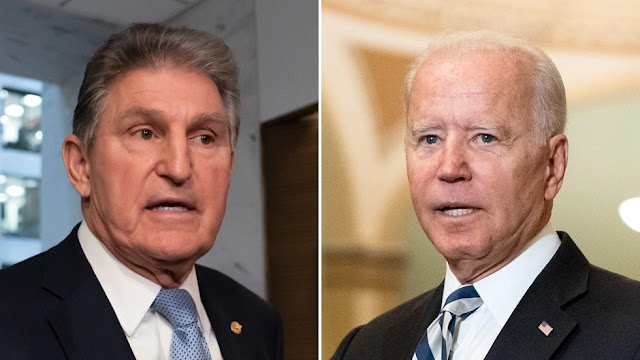 Sen. Joe Manchin (D-W.Va.) told Senate Majority Leader Charles Schumer (D-N.Y.) “unequivocally” on Thursday that he will only support a narrow budget reconciliation package before Labor Day if is does not include new spending to fight climate change or taxes on wealthy individuals or corporations, according to a Democrat briefed on the talks.
Manchin has informed Schumer that if Democrats move the reconciliation bill in August, he will only support a provision to lower prescription drug prices and a two-year extension of expiring health insurance subsidies under the Affordable Care Act, according to the source.
Manchin has backed away from a commitment he made privately to Schumer last week to close a tax loophole on wealthy individuals and couples who earn more than $400,000 and $500,000 annually in pass-through income. That revenue would have been used to extend the solvency of Medicare’s hospital trust fund by three years to 2031.
Senate Democrats now face a choice of either moving forward on a slimmed-down reconciliation bill to lower the costs of up to 20 prescription drugs and avoid a spike in Affordable Care Act-subsidized health care premiums before the November midterm elections or to keep trying to negotiate with Manchin over proposals to fight climate change.
Schumer is pushing to move the reconciliation package to the floor before September, because many states are planning to announce Affordable Care Act premium increases next month.
Waiting until the end of September, when the budget reconciliation instructions that protect the bill from a GOP filibuster are due to expire, could mean that it would then be too late to avoid health insurance premium increases.
Given that the August recess is only a few weeks away, it doesn’t appear Senate Democrats will be able to pass any of the climate provisions that seemed possible just a few days ago, such as tax credits for clean energy and a fee on methane emissions.
“Political headlines are of no value to the millions of Americans struggling to afford groceries and gas as inflation soars to 9.1 percent. Sen. Manchin believes it’s time for leaders to put political agendas aside, reevaluate and adjust to the economic realities the country faces to avoid taking steps that add fuel to the inflation fire,” said Manchin’s spokeswoman, Sam Runyon.
Schumer’s office did not offer a public statement in response.
Manchin’s explicit statement that he will not support a bill in August with any provisions addressing energy or the climate or raising taxes on wealthy individuals and corporations comes after he had previously indicated his openness to supporting such proposals throughout negotiations with Schumer.
Schumer told Manchin during the talks that he wanted to spend $375 billion to address rising global temperatures and made several major concessions to win the West Virginia senator’s support.
The Democratic leader committed to using half of all revenue gained from the bill’s tax increases and tax loophole closures to reduce the deficit, a major Manchin priority.
Schumer also agreed to drop tax credits for electric vehicles, offering to strike the provision after months of trying to change Manchin’s mind on the subject. He told Manchin he would provide the same credits for hydrogen-battery fueled cars as for electric vehicles.
And he offered Manchin concessions on permitting reform for oil and gas drilling, to make it easier to get fossil fuels to market.
Despite weeks of cajoling and concessions, Manchin told Schumer flatly on Thursday that he will not support a bill that included the negotiated climate provisions, a major disappointment for progressives such as Sens. Sheldon Whitehouse (D-R.I.), Ed Markey (D-Mass.) and Jeff Merkley (D-Ore.).
Now green Democrats have to decide whether they’re willing to vote for a budget reconciliation bill next month that does not include any significant reforms to curb global warming.
Even with Schumer’s concessions to Manchin, the package retained tax credits for clean energy initiatives and would have lowered carbon emissions by close to 40 percent by 2030, according to a Democratic estimate.
Posted by High Plains Pundit on July 15, 2022
Email ThisBlogThis!Share to TwitterShare to FacebookShare to Pinterest
Tags: National