Let's talk about the fist bump seen around the world

A vivid reminder of our place in the U.S.-Saudi relationship. 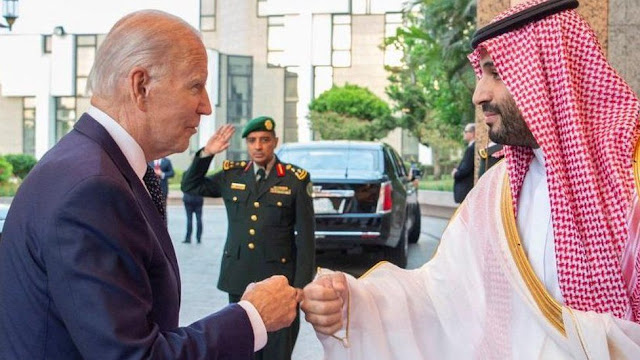 The president talked very, very tough about the Saudis during a Democratic primary debate in late 2019. “[Jamal] Khashoggi was, in fact, murdered and dismembered, and I believe on the order of the crown prince,” he told Americans. “And I would make it very clear we were not going to, in fact, sell more weapons to them, we were going to, in fact, make them pay the price and make them, in fact, the pariah that they are.” They have to be held accountable for murdering innocent people, including Yemeni children, he added.
Less than two years later, he dialed them up during the Ukraine crisis to ask for their help with oil prices and got sent to voicemail.
The Atlantic asked Mohammed bin Salman a few months ago about the broken relationship between Riyadh and the White House. MBS shrugged and dangled the prospect of an alliance with China instead. “Where is the potential in the world today?” he said. “It’s in Saudi Arabia. And if you want to miss it, I believe other people in the East are going to be super happy.” When he was asked whether he thought Biden has misunderstood him, he replied, “Simply, I do not care,” adding, “It’s up to him to think about the interests of America.”
Axios reports that when the president of the United States arrived in Jeddah today, neither the king nor the crown prince, bin Salman, were there to greet him. It fell to the local governor to meet him as he stepped onto Saudi soil.
We’re the client.
The spectacle of Biden being humbled by an outfit as sleazy as the Saudi royal family is mortifying, and not just to conservatives. Democrats who normally bite their tongues when asked to criticize Biden are speaking up.
Biden’s team announced before his trip that he wouldn’t be shaking hands while overseas as a COVID precaution, resorting to the safety of fist bumps instead. Some suspect that was a contrived excuse to spare him from having to shake MBS’s hand, but I don’t know. Would a handshake photo op have been any worse optics-wise than a chummy fist bump?
Yesterday WaPo columnist Josh Rogin urged Biden to use his time with MBS to ask for the immediate return of Americans being held as de facto hostages by Saudi Arabia. That would have been a small gesture towards human rights by bin Salman and would have helped Biden justify his kowtowing to the crown prince. A little presidential abasement can be forgiven in the name of bringing Americans home safely.
“Air Force One is large enough for all of them,” reads a letter sent to Biden on Tuesday by Ali Al-Ahmed, president of the Committee for American Hostages in Saudi Arabia, a group that works with families of American citizens and residents who are unjustly imprisoned in Saudi Arabia or barred from leaving the kingdom. “These American citizens need to come home now. There is no better way to come home than riding home with their top elected leader.”
Ahmed’s cousin, Badr al-Ibrahim, was released in 2021 after spending two years in prison for criticizing the regime’s human rights record, but he is still banned from leaving the country. The physician is only one of many American citizens being held hostage by the Saudi regime. They include American journalist Salah al-Haidar, his mother Aziza al-Yousef, physician Walid al-Fitaihi and women’s rights activist Loujain al-Hathloul, all of whom were jailed for human rights activism and now are banned from travel. Fitaihi and Hathloul were allegedly tortured in prison.
There’s no indication this afternoon that any of the hostages will be freed.
Biden spoke to the press after his meeting with bin Salman and insisted that he raised the Khashoggi murder with him and made his feelings plain.
"With respect to the murder of Khashoggi...I said, very straightforwardly, for an American president to be silent on an issue of human rights is inconsistent with who we are and who I am."
There’s no way around the fact that Biden was visiting as a supplicant, forced by the economic pain of high gas prices and the political pain bearing down on his party in November to beg for relief. It’s anyone’s guess what he promised the Saudis in exchange for boosting oil production. It will be interesting to know just how well Khashoggi’s killers made out on our Faustian bargain with them this time.
Posted by High Plains Pundit on July 16, 2022
Email ThisBlogThis!Share to TwitterShare to FacebookShare to Pinterest
Tags: World