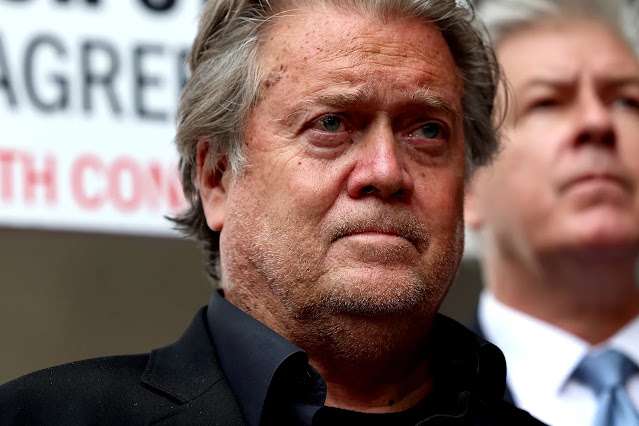 A federal jury on Friday convicted Stephen Bannon of two counts of contempt of Congress for defying a subpoena from the House committee investigating the Jan. 6, 2021, attack on the U.S. Capitol.
The 68-year-old political strategist, who served as former President Trump’s campaign CEO and White House adviser, faces a minimum sentence of 30 days and a maximum of one year in jail for each count.
The jury took less than three hours to reach a verdict on the two misdemeanor counts. They began deliberating on Friday after hearing testimony from just two witnesses over the course of a week.
Bannon and his attorneys vowed to appeal and criticized the select committee and federal prosecutors for pursuing the case.
“This is a bulletproof appeal,” David Schoen, one of Bannon’s attorneys, said after the verdict was announced.
“The overreaching by the government in this case has been extraordinary at every level.”
Speaking to reporters outside the courthouse after the verdict, Bannon thanked the judge and jury after the week-long trial but remained defiant towards the select committee.
“I only have one disappointment, and that is that the gutless members of that show trial committee, the J-6 committee, didn’t have the guts to come down here and testify in open court,” he said.
Matthew Graves, the U.S. Attorney for D.C., applauded the decision.
“The subpoena to Stephen Bannon was not an invitation that could be rejected or ignored,” Graves said in a statement. “Mr. Bannon had an obligation to appear before the House Select Committee to give testimony and provide documents. His refusal to do so was deliberate and now a jury has found that he must pay the consequences.”
Reps. Bennie Thompson (D-Miss.) and Liz Cheney (R-Wyo.), the chair and vice chair of the select committee, said the verdict was an “important affirmation” of the panel’s work.
“As the prosecutor stated, Steve Bannon ‘chose allegiance to Donald Trump over compliance with the law,’” Thompson and Cheney said in a joint statement. “Just as there must be accountability for all those responsible for the events of January 6th, anyone who obstructs our investigation into these matters should face consequences.  No one is above the law.”
Bannon’s lawyers chose not to present their own case, offering no defense witnesses. Evan Corcoran, one of Bannon’s attorneys, said in his closing argument Friday that there was plenty of reasonable doubt concerning his client’s guilt.
“We didn’t feel the need to put on a defense,” Corcoran told the jury.
Prosecutors had argued the case presented a straightforward question of whether Bannon met the legal obligations laid out for him in the subpoena last year.
“This case is not complicated, but it is important,” Molly Gaston, an assistant U.S. attorney, said in her closing argument Friday. “When it came down to it, he did not want to recognize Congress’s authority or play by the government’s rules.”
Bannon was indicted in November after the House voted to hold him in contempt for failing to show up for a deposition and turn over documents as demanded by the Jan. 6 select committee’s subpoena.
The subpoena, issued on Sept. 23, ordered Bannon to turn over a wide range of documents by Oct. 7 of that year and appear before the committee for a deposition on Oct. 14.
An attorney for Bannon, Robert Costello, said in letters to the committee that his client would not comply because Trump had asserted executive privilege and because of an ongoing civil case at the time between the former president and the select committee.
While Corcoran had told the jury Friday that the defense felt no need to present a case, Bannon’s lawyers expressed frustration throughout the trial that they had been “handcuffed” from presenting certain arguments.
U.S. District Judge Carl Nichols had ruled Bannon would not be allowed to argue at trial that he was relying on the advice of his lawyers in not complying with the subpoena or that any assertion of executive privilege excused him from meeting the committee’s demands.
On Thursday, Schoen told the court his client would have testified in his own defense if Nichols had not prohibited them from mounting those arguments.
“He’s wanted to testify publicly in this case under oath to tell the court, the jury and the public exactly what the true facts of the case are,” Schoen said. “However, on the advice of counsel … he has decided not to testify, because he understands that he would be barred from telling the true facts explaining why he did what he did, and why he did not do what he did not do in relation to the committee’s subpoena. He wanted to testify under oath to explain that at all times, he believed he was doing what the law required him to do, based on his lawyer’s advice.”
The defense team tried to complicate the prosecution’s narrative of an open-and-shut case with suggestions of political bias against Bannon.
During his closing argument Friday, Corcoran even compared Thompson’s signature, the select committee’s chairman, that was on the subpoena with other examples of his signature in an attempt to sow doubt in the jury that the subpoena was valid.
But throughout the trial, prosecutors pushed a straightforward case that Bannon had an obvious obligation to comply with the subpoena’s demands and he failed to do so.
“There were two witnesses because it’s as simple as it seems,” prosecutor Amanda Vaughn told the jury on Friday. “How much clearer could that subpoena have been?”
“The only person talking about politics in this case is seated over there, it’s the defendant,” Vaughn added. “The only reason they want to talk about any of these things is that they don’t want to talk about his contempt.”
Bannon is scheduled to be sentenced on Oct. 21.
Posted by High Plains Pundit on July 22, 2022
Email ThisBlogThis!Share to TwitterShare to FacebookShare to Pinterest
Tags: National