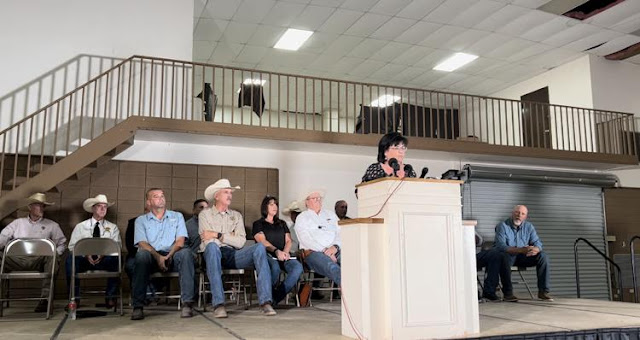 By Bethany Blankley
Texas judges near the southern border with Mexico who this week signed declarations of an invasion and sheriffs from their counties responded to questions about their actions being potentially racist and a violation of federal immigration law.
Terrell County Judge Dale Curruthers and two other county judges in Texas on Tuesday signed declarations of invasion and called on Gov. Greg Abbott to also declare an invasion at the southern border under Article 1 of the U.S. Constitution. Since then, a total of six county judges and one mayor have signed invasion declarations. More are expected to follow.
After citing their commitment to uphold the Constitution, the judges and sheriffs said they need to take such extraordinary measures to defend against imminent threats to the lives of their residents, increased overall crime, increased unsustainable costs to county governments and a lack of resources, among others.
Antonio Guillen with Univision-San Antonio asked the judges at a news conference in Brackettville, Texas, “If the invaders were from Norway, Germany … would you be pushing that hard if they were from somewhere other than Latin America?”
Curruthers replied, “We are pushing it very hard. Terrell County has less than 1,000 people. We have had [people from] over 100 different countries go through Terrell County. That is of every shade of Melanin in your skin. We have experienced an invasion that is something of every language.
“And I say that – I am a multi-racial judge. I am standing here letting you know it is not of color. There are over 100 countries coming through. We are trying to protect the sovereignty of Texas. I am a constitutional judge and we are standing behind the constitution.”
A New York Times reporter asked the sheriffs if they would be deporting people who were in their counties illegally. Kinney County Sheriff Brad Coe said he transported four human smugglers to the port of entry last week so they could “return home.”
“There was no formal deportation,” he said. “We put them in a truck and took them home.”
Terrell County Sheriff Thad Cleveland said doing the same “may be something we entertain down the road,” although he has been bringing people to a Border Patrol station.
Medina County Sheriff Randy Brown said when Border Patrol agents “won’t come to pick up illegal aliens” he’s apprehended, he takes his jail transport van and transports them an hour south to the Border Patrol station in Cotulla. “We do that often. Our MacDonald’s on 35 in Devine has become an exchange location where we take illegals, not immigrants – they are illegally here – write that down, and we exchange them with the Border Patrol. That’s where they come to pick them up.
“Those guys are overworked with boots on the ground and are doing what they can but their hands are tied by what they’re told they have to do. They want to make a difference. We want to make a difference. All of us took an oath. We take that oath serious.”
Brown said his deputies are dealing with pursuits of human smugglers and illegal activity three to four times a day.
“We are catching people going south," he said. "They are in stolen vehicles. Most of them are stolen out of San Antonio. We used to deal with them out of Houston. So we’ve got stolen vehicles going south to load and loads coming back north" of smuggled people.
Goliad Sheriff Roy Boyd said, “I won’t be deporting anybody. If you come to Goliad County, you break the law, I’m gonna throw you in jail. We’re not going to turn you over to Border Patrol. We’re not going to take you down to bridge. Unlike Sheriff Coe, who has an extremely small jail, we have room. We have a vacancy sign; we will make room; we will throw you in jail.
“Everybody goes to jail that’s engaging in criminalized organized activity and smuggling of persons, trafficking persons, they’re always evading, they’re destroying fences, they’re trespassing. The damage is phenomenal.”
When asked by an individual claiming to be an independent journalist about an immigration attorney reportedly claiming their actions could potentially violate immigration law, Boyd said, “Which felonies do you want us to ignore? To ignore the evadings? To ignore the organized criminal activity? Or do you want us to ignore the bank robbers and sexual assaults?
“We have a duty to uphold the law regardless of who it is. We don’t care if you’re American, if you’re from Mexico, from Norway or wherever you’re from. You come in our jurisdiction and you break the law, you’re going to jail.”
Posted by High Plains Pundit on July 07, 2022
Email ThisBlogThis!Share to TwitterShare to FacebookShare to Pinterest
Tags: Texas