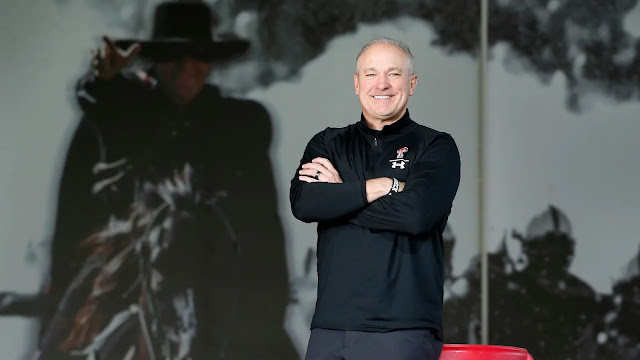 There’s no question that the main storyline for the 2022 Texas Tech football season will be the debut of Joey McGuire as a collegiate head coach. After all, since the moment McGuire joined the college coaching ranks, it’s seemed like a mere formality that he would eventually lead his own program. Now he’s got that opportunity and fortunately, he is set up to succeed in ways that his predecessor, Matt Wells, wasn’t.
First of all, I must reiterate my stance that Mat Wells never should have been hired to lead a Big 12 program in the first place.  Thus, when I say that McGuire is set up to succeed in ways that Wells wasn’t, that is by no means my way of trying to make an excuse for Wells.
Still, there is no way McGuire and his predecessor won’t be compared to one another.  That’s just the nature of sports and what fans do.
But regardless of what McGuire’s record winds up being this fall, it appears that he is set up to succeed in the long term in ways that Wells could only have dreamed of.  And that should excite Texas Tech football fans.
First of all, McGuire is welcomed by the fans.  In fact, he’s already beloved by the majority of those who bleed scarlet and black.
That’s something that Wells never had going for him.  From the moment he was announced as Kliff Kingsbury’s replacement, Wells was met with a tepid reaction from the Tech populace, a reaction that would quickly turn to disdain for many after Wells’ early struggles.
Wells may be a nice person (I’ve never met him) but he simply doesn’t have the type of magnetism that McGuire oozes and that’s perhaps the greatest difference between the two coaches.  But you have to wonder if McGuire’s instant popularity has been aided in part by the simple fact that he isn’t Matt Wells, who will go down as one of the most unpopular coaches in program history.
But for whatever reason, McGuire is already the toast of Raiderland and that’s going to lead to massive support from a fan base that had grown increasingly jaded and emotionally uninvested over the past decade.  Thus, the entire temper around Texas Tech football is different as McGuire sets out on his inaugural voyage as the entire Red Raider family is finally once again pulling in the same direction.
McGuire also is going to benefit massively from the commitment that the university has made to the football program.  When you factor in donations from Dusty Womble and Cody Campbell last year, there has been $220 million invested into the Red Raider football program since the beginning of October.
Though the new money coming into the program won’t pay dividends in 2022, they are a huge selling point for McGuire on the recruiting trail.  That’s something Wells never had going for him during his tenure.
Of course, one of the reasons why Tech didn’t get the type of financial backing under Wells that has come to fruition under McGuire is that Wells never could win over the important boosters, especially Campbell, like McGuire appears to have.  Regardless of why though Tech has now made a huge investment into the program to bring the facilities up to par with the top programs in the nation and that’s going to set McGuire on a far greater trajectory than the man he replaced.
Then, there is the talent McGuire has in the program, especially at the QB position.  And this is where we have to give Wells his due.
Via both the traditional recruiting trail and the transfer portal, he significantly upgraded Tech’s talent at the game’s most important position.  With Tyler Shough, Donovan Smith, and Behren Morton all in the mix, Tech’s QB room is healthier than it has been since the Mike Leach era.
Thus, McGuire has three quarterbacks that he seems to feel highly confident in as he nears his first season.  Should something go wrong with whichever wins the starting job in fall camp, he will have two quality fall-back options.  That wasn’t the case for Wells in 2019.
Because of Kliff Kingsbury’s poor recruiting at the QB position in the years after the Pat Mahomes era, Tech handed Wells a big bag of nothing to work with at QB when he took over.  Alan Bowman was a shell of the player that he showed to be in 2018, even before he went down with a broken collar bone in the third game of the year against Arizona as the mental residue of his 2018 injuries seemed to rob him of his effectiveness as a QB.
After him, Wells had to turn to Jett Duffey or Jackson Tyner, neither of whom were good enough to be a difference-maker in the Big 12.  Therefore, the Wells era got off to a poor start thanks in large part to the QB futility that he inherited.
That shouldn’t be the case with McGuire in 2022.  He’s got one QB (Shough) who has led a team to a PAC 12 championship (in 2020) and he has another (Smith) who managed to go 2-2 as a starter last year in his first four games at the college level.  His third option (Morton) was a 4-star recruit who was the most highly-rated high school QB to sign with Tech since Graham Harrell.
The simple truth is that Wells was a disaster from the start.  He went just 4-8 in year one and never got the program on a positive track in the two years after that.
But though McGuire’s first season looks daunting given the tough out-of-conference schedule he faces, there’s no question that he is set up to succeed in ways that Wells wasn’t.  And that’s one reason why there is so much excitement surrounding Texas Tech football this offseason.
Sports