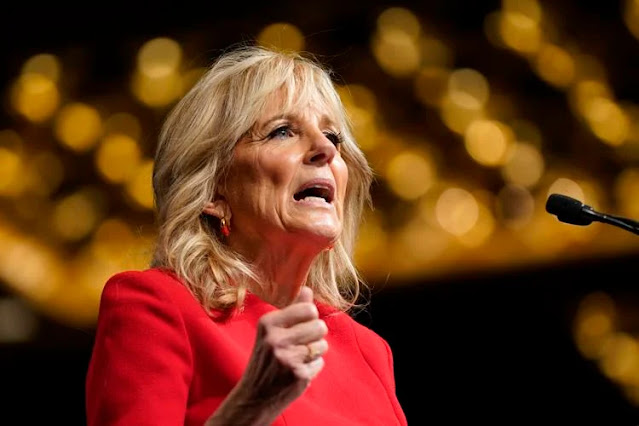 First Lady Jill Biden is taking fire from Hispanic groups after her comments comparing them to different kinds of breakfast tacos.
“The First Lady’s comments yesterday comparing Hispanic people to tacos shows yet again Democrats’ low regard for our people,” said Elizabeth Castro Gray, state chair for the Republican National Hispanic Assembly. “She reduced us to a caricature, a stereotype. Mrs. Biden demonstrated yet again why Hispanics are leaving the Democratic Party in huge numbers. We have little patience for a party that treats us as helpless victims. Who looks to us as little more than a reliable voting bloc.”
Recent polling shows Hispanic voters are dissatisfied with the state of the country under Democratic leadership. A Quinnipiac University poll released in May found that Hispanic voters disapproval of President Joe Biden had hit 60%.
“We value life, liberty, and the pursuit of happiness. Like most Americans, we are people of faith who want to live in safety and who want the opportunity to work hard, to succeed, and to provide a better future for our children,” Gray said.
“We are not tacos. Somos Republicanos,” she added.
Jill Biden's office issued an apology after the comments.
"The first lady apologizes that her words conveyed anything but pure admiration and love for the Latino community," said Michael LaRosa, her spokesperson.
Rep. Mayra Flores, the first Mexican-born member of Congress and a Republican, has become a focal point of the growing Latino support in the Republican party. She blasted the First Lady on Twitter.
“They just don’t get it. Latinos aren’t buying their liberal pandering; we care about the rising costs of housing, food, gas, issues that impact everyday Americans,” she said. “No matter how loud they yell their made up words, it won’t change the reality of their failed policies.”
The criticism, though, extended beyond the Republican party.
“We are not tacos,” the National Association of Hispanic Journalists said in a statement responding to the comments. “Our heritage as Latinos is shaped by various diasporas, cultures [and] food traditions. Do not reduce us to stereotypes.”
Posted by High Plains Pundit on July 12, 2022
Email ThisBlogThis!Share to TwitterShare to FacebookShare to Pinterest
Tags: National