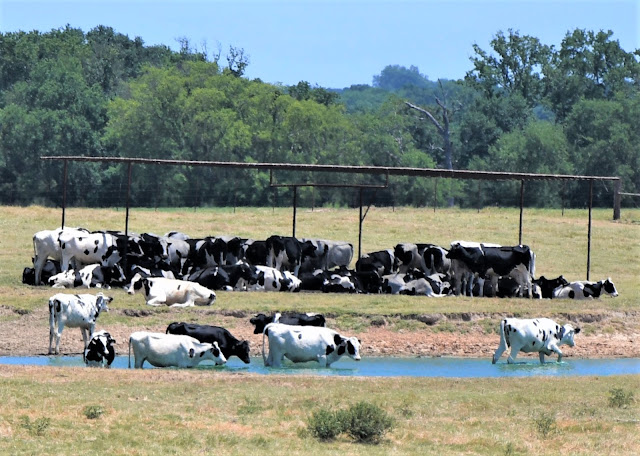 A heat wave across the state is exacerbating the extreme drought conditions plaguing Texas agriculture.
Texas A&M AgriLife Extension Service agents and regional specialists around the state have reported a wide range of issues related to triple-digit temperatures and worsening conditions for livestock and crop producers. There are reports of poor forage and growing conditions throughout the state, including failed to stunted plants and lower yield expectations on crops ranging from sorghum, cotton, peanuts and pecans.
Livestock producers in drier areas of the state have been weaning and marketing calves earlier and culling herds deeper than usual. There are also reports of herd consolidations occurring. The main factor driving higher and earlier cattle sale volumes is poor spring forage production from lack of rainfall and the high cost of supplemental feed.
Hay supplies are tightening and cuttings have been well below average in most parts of the state so far. Declining surface water and poor water quality in stock ponds and tanks is becoming a wider issue for many producers.
The extent of drought is driving local governments to implement restrictions on activities, including water consumption and outdoor burning.
Burn bans have been implemented by county commissioners’ courts in 206 Texas counties as of July 11, according to the Texas A&M Forest Service.
Irrigation water for agriculture is also falling under use-restrictions that limit applications to crops like cotton and pecans due to below-normal water levels in reservoirs and aquifers that desperately need runoff rainfall to recharge.
Reagan Noland, Ph.D., AgriLife Extension agronomist, San Angelo, said the high temperatures and dry soil are leading to widespread crop failures even in some irrigated fields. There are no water restrictions on wells that pull from the aquifer for agriculture in that area.
Noland said his area had good rain until mid-August last year but received no appreciable rain between late October and late May. When the area did pick up a 2-inch rain around May 22, Noland said high temperatures and wind left muddy fields powder dry within days.
“I hoped the rain in late May would provide a decent opportunity to plant cotton, but it wasn’t enough. Our subsoil moisture was too depleted for any planting moisture to persist,” he said. “Some irrigated fields looked OK, but most dryland crop acres never established at all, or seedlings burned up in the heat.”
Heat wave delivers 100-degree days
John Nielsen-Gammon, Ph.D., state climatologist in the Texas A&M College of Geosciences Department of Atmospheric Sciences, said much of Texas has been experiencing above-average temperatures for months.
South and Central Texas has been exceptionally hot this year, he said. San Antonio recorded 32 days over 100 degrees so far. The previous record for 100-degree days by this time of year in the city was 20 days in 2009. College Station has experienced 23 days with 100-degree temperatures, which is also more than ever recorded.
Statewide, the Big Bend region has seen 78 days of triple-digit temperatures. Other notable locations with 100-degree days include Cotulla with 62, Laredo with 57, Del Rio with 48, Abilene with 45, and San Angelo with 44.
San Angelo is almost on pace with 2011 for 100-degree days. The city recorded 46 days over 100 degrees by this time and ended that year with 100 days over 100 degrees, he said.
Multiple factors aligned to produce the high temperatures Texas is experiencing this summer, he said, including the early arrival of high temperatures. Locations in much of the state recorded record or near-record May temperatures that were above typical June average temperatures.
Above-average spring temperatures and drought conditions compounded environmental effects on summer temperatures. The lack of moisture means there is less evaporative cooling, and more of the sun’s energy heats the ground which heats the air.
Nielsen-Gammon said the water temperatures in the Gulf of Mexico are also well above normal. Most spring and summer air circulates into the state from the Gulf, and warmer conditions there translate into warmer air as it moves through the state.
Heat waves like the one Texas is experiencing are related to weather patterns that create a dome of high pressure over the state or to the north, he said. The pattern prevents the flow of moist, tropical air and instead delivers air that has been sitting over the state or other hot areas around Texas.
No relief in sight
Nielsen-Gammon expects summer temperatures to remain above normal as soils continue to lose moisture and retain heat.
“Unfortunately, the very hottest temperatures typically occur later in the summer, so off hand, I don’t see any relief in the future,” Nielsen-Gammon said. “It looks dismal for the next couple of weeks.”
Nielsen-Gammon said a looming tropical disturbance could deliver some moisture to Louisiana and southeast Texas, but most of the state is likely to remain dry and hot.
According to U.S. drought monitor archives, 100% of Texas experienced at least abnormally dry conditions with almost 72% experiencing exceptional drought conditions. The 2011 drought conditions peaked in October when 88% of the state was exceptionally dry while 97% of the state was in extreme to exceptional drought.
Almost 98% of Texas is abnormally dry, but only 46% of the state is experiencing extreme to exceptional drought and 16% of the state suffering exceptional drought, according to the drought monitor. But it is a hard sell to tell many agriculture producers and farmers across Texas that 2022 has been better.
Much of the state has received some scattered rain since January, Nielsen-Gammon said, but a few areas have received less moisture than in 2011. Corsicana, for example, has received less than 20 inches of rainfall since Sept. 1, compared to nearly 25 inches over the same period in 2010-2011.
“There are definitely people who would take issue with anyone saying conditions are better in 2022 than in 2011,” he said. “For some, the impacts are going to be worse.”
Farm and Ranch Local