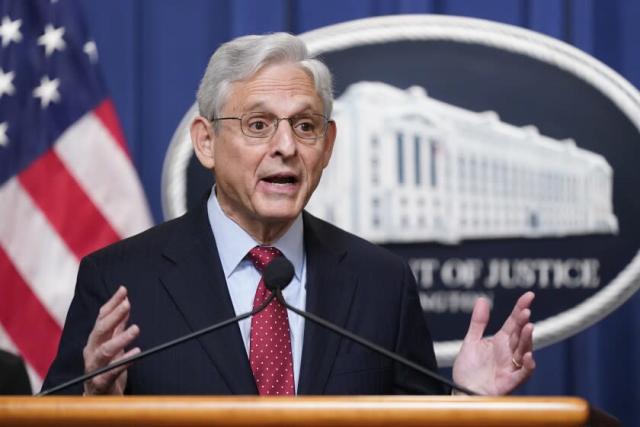 Attorney General Merrick Garland on Tuesday pushed back on criticism that the Justice Department has not been aggressive enough in investigating whether former President Trump and his allies broke the law in trying to overturn the 2020 election.
In an interview with NBC News, Garland insisted the department was urgently investigating the Jan. 6, 2021, attack on the Capitol and the events leading up to it, vowing to charge “everybody who was criminally responsible for interfering with the peaceful transfer of power.”
“It is inevitable in this kind of investigation that there’ll be speculation about what we are doing, who we are investigating, what our theories are,” he said. “The reason there is this speculation and uncertainty is that it’s a fundamental tenet of what we do as prosecutors and investigators is to do it outside of the public eye.”
The interview on Tuesday coincided with a Washington Post report that federal prosecutors have begun asking grand jury witnesses about Trump’s conduct and their contact with him, a sign that the former president could now be a subject of the probe.
Garland has been subject to mounting pressure throughout the summer as the House committee investigating the Jan. 6 attack has presented damning evidence in a series of public hearings aimed at convincing voters and the Justice Department of Trump’s criminal culpability.
When asked on Wednesday whether he had any concern about the political ramifications of indicting a former president, Garland gave no hint about whether it was under serious consideration within the department but insisted that prosecutors will weigh only the facts and the law when making such a decision.
“We pursue justice without fear or favor,” Garland said. “We intend to hold everyone, anyone who was criminally responsible for the events surrounding Jan. 6 or any attempt to interfere with the lawful transfer of power from one administration to another accountable. That’s what we do.”
National