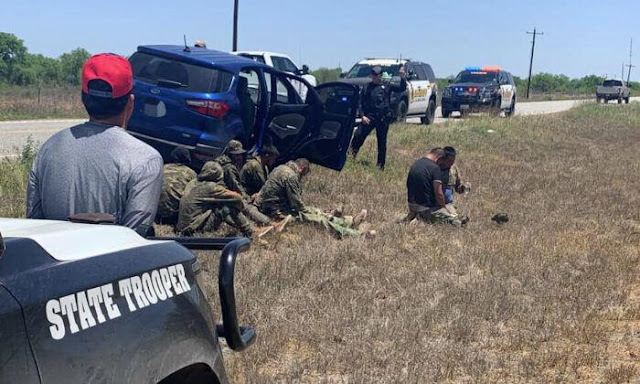 By Bethany Blankley
Federal and state investigators continue to take action against foreign nationals who enter the U.S. illegally and commit crimes unrelated to illegal immigration.
Many perpetrators and victims aren’t entering the U.S. claiming asylum or seeking to immigrate to the U.S. illegally. They’re often involved in human and drug smuggling, actively evading law enforcement after they’ve entered the U.S. illegally through the southern border.
In the past few weeks, investigators’ efforts have led to arrests, convictions, and sentencing of criminal foreign nationals in the U.S. illegally.
Several recent cases involve human smuggling and human trafficking incidents. Human smuggling involves willing participants who pay to be brought into the U.S. illegally; human trafficking victims are non-willing participants bought and sold as commodities by modern-day slave owners. Those who are smuggled and trafficked are often kept in squalid conditions and many die.
On June 30, three individuals were arrested and charged with conspiracy to harbor and transport foreign nationals for profit, in Phoenix, Arizona, including a Mexican national wanted by officials in Travis County, Texas, for aggravated sexual assault of a minor.
Jesus Gabriel Villela-Duran, 28, Salvador Lopez-Vargas, 36, and Eleazar Soto-Diaz, 34, all Mexican citizens, were arrested for smuggling 86 people who were identified as citizens of Mexico, Guatemala and Honduras, according to Immigrations and Customs Enforcement.
Numerous Homeland Security Investigations officials and U.S. Border Patrol agents participated in the investigation.
After executing two search warrants, agents found 79 people being kept inside a house and apartment at the Sundowner complex in Phoenix; seven were found inside a nearby vehicle.
“A conviction for conspiracy to transport and harbor illegal aliens for profit carries a maximum penalty of 10 years, a maximum fine of $250,000, or both,” ICE states.
On July 5, Nelson Bahena-Garcia, a 43-year-old Mexican citizen, was sentenced to 21 years in federal prison for his role in a human smuggling attempt and conspiring to commit hostage taking thath resulted in the death of a Honduran woman. HSI officials in Victoria, Houston, and McAllen, Texas, working with U.S. Border Patrol, and the Victoria County Sheriff’s Office, participated in the investigation.
Bahena-Garcia, who was illegally living in Mission, Texas, was sentenced in the Southern District of Texas. He’s expected to face removal proceedings, ICE states.
The investigation began after the missing Honduran’s fiancé contacted officials in Texas saying he couldn’t make payments to Bahena-Garcia for her release.
The case dates back to May 2018, when authorities found her naked body on a rural county road in Victoria County. Investigators later learned she’d collapsed during a smuggling attempt and had to be carried. Bahena-Garcia admitted to law enforcement that he instructed a fellow smuggler to leave her in the brush to die. He also operated a human smuggling stash house using threats and intimidation, investigators said.
HSI agents are currently investigating a human smuggling event that led to the death of 53 people in San Antonio on June 27.
San Antonio Police Department officers initially discovered multiple individuals inside a tractor trailer, on the ground, and in nearby brush – many of whom were deceased, on June 27.
Among the 48 found dead at the scene, 22 were Mexican nationals, seven were Guatemalans, two were Hondurans, and 17 were of unknown origin. They were suspected to be illegally smuggled into the U.S. through the Texas-Mexico border, ICE said in an official statement. Another five died at the hospital.
Juan Claudio D’Luna-Mendez, 23, and Juan Francisco D’Luna-Bilbao, 48, Mexican citizens in the U.S. illegally, were arrested, as well as U.S. citizens involved in the scheme.
Other crimes committed by foreign nationals in the U.S. illegally relate to drug smuggling and trafficking.
Honduran national Edwin Lopez-Chavez, 28, was sentenced in the southern district of Texas on June 28 for possession with intent to distribute nearly two kilograms of cocaine. His arrest came about from an investigation conducted by HSI-Corpus Christi and federal officials and after a jury deliberated for less than five hours after a two-day trial. ICE says he’s expected to face removal proceedings.
Mexican national Juan Carlos Juarez-Torres, 41, was also recently sentenced to 20 years in prison for his involvement in drug trafficking as the result of an investigation by federal officials, the Pinal County Sheriff’s Office, and the West Desert Task Force in Arizona.
He pleaded guilty to conspiracies to import marijuana, distribute marijuana, possess with intent to distribute marijuana, and commit money laundering.
In Tucson, Arizona, Sergio Geovany Cruz-Sabillon, 32, of Rio Lindo, Honduras, was sentenced to 96 months in federal prison on June 23 for his involvement in a conspiracy to import methamphetamine into the U.S. from Mexico. His arrest, conviction and subsequent sentencing was a result of federal agency investigations.
Texas