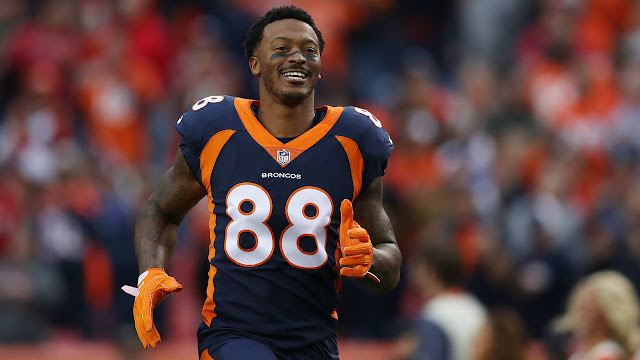 A new report released from the New York Times on Tuesday morning says that former Denver Broncos great Demaryius Thomas had Stage 2 chronic traumatic encephalopathy (CTE) when he died in December.
Thomas died at 33 on Dec. 9, 2021 from what is believed to have been medical complications stemming from a 2019 crash. His official cause of death has not been released from the coroner’s office.
According to the Times, doctors from Boston University posthumously diagnosed Thomas with Stage 2 CTE.
A doctor and neuroscientist with the Concussion Legacy Foundation said both CTE and seizures from the crash were conditions Thomas struggled with.
“DT,” one of the all-time greatest Broncos wide receivers, announced his official retirement from the NFL in 2021 after a 10-year career.
He was a first-round draft pick for the Broncos in 2010 and played nine seasons with the team. He was part of the winningest four-year period in team history from 2012-15, when the team won two AFC Championships and Super Bowl 50. He also made five consecutive Pro Bowls.
Thomas finished his career ranking second in Broncos history with 9,055 receiving yards and 60 touchdown catches, while his 665 receptions ranks third. In 143 career games, Thomas had 724 catches for 9,763 yards and 63 touchdowns.
He would have been eligible to be honored in the Broncos Ring of Fame in 2026.
In his 10 seasons in the NFL, he also played for the Texans, Patriots and Jets.
Thomas was born in Montrose, a tiny town in southeast Georgia. At age 11, Thomas’ mother and grandmother were arrested on crack-cocaine distribution charges and sentenced to 20 years and life in prison, respectively.
Thomas’ father was serving in the Army and stationed in Kuwait when his mother and grandmother were arrested in 1999. Thomas went to live with an aunt and uncle, Shirley and James Brown, a Baptist minister who lived six miles away.
Thomas took up football to stay off the streets and out of trouble. He went on to play at Georgia Tech, finishing his career with 120 receptions for 2,339 yards and 14 touchdowns in three seasons.
In 2015, President Barack Obama commuted the sentence for his mother, Katina Smith, and she was eventually able to see her son play football in person. During the Super Bowl 50 honoring ceremony at the White House, Thomas delivered a letter to Obama asking him to pardon the sentence for his grandmother, Minnie Pearl Thomas. It was commuted two months later.
Sports