Biden’s progressive playbook a bigger problem than his age 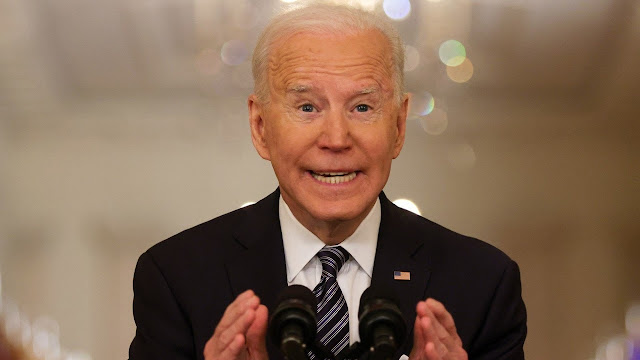 It took the New York Times two years to discover that President Biden is 79 years old. Now that they have caught up, they are not entirely convinced that Uncle Joe is capable of tackling the toughest job on the planet. He’s a little slow, they admit sotto voce, a little behind the curve.
They are especially concerned about him running for a second term in 2024.
No kidding. Many of us reached that conclusion back in 2020, when Biden was campaigning from his basement and rarely available for interviews or even fundraisers. It was pretty clear something was not right.
Now, Biden’s apparent mental deterioration is suddenly the talk of the town. The Washington Post opens a recent analysis piece with: “President Biden is … not young.” Insightful reporting like that surely earns the confidence of readers.
CNN, MSNBC and most of the rest of the liberal media has turned on the president with a vengeance, questioning whether he is fit for office and downplaying his prospects of running again.
What is going on here? Why this sudden about-face?
Simple. The liberal media sees Biden failing and they want voters to turn their wrath on Biden, not the awful policies he brought with him to the Oval Office. The Times, the Washington Post and other liberal outposts would like Americans to think the failures of the Biden White House are due to the president’s age and fragility and not the Bernie Sanders playbook that rules the West Wing.
Heaven forbid that angry Americans come to realize that Biden’s climate obsession and pursuit of “equity” are the real problem, and not the doddering president. Or that voters question the wisdom of shutting down our oil and gas industry amid soaring gasoline prices and a real-life energy crisis in Europe. Or decide that raising taxes on small businesses while our economy slides into recession is clearly a mistake.
Or…that Americans recognize that more lavish spending by our government is – despite Biden’s fatuous claims to the contrary – not the way to fight inflation.
Heaven forbid the leftist agenda Biden is pushing is revealed for what it is: a fraud and a giant tax on working-class Americans.
And yet, that is exactly where the public has landed. In a recent Monmouth University poll that received little attention, 57 percent of Americans say that the actions of the federal government over the past six months have hurt their family when it comes to their most important concerns — inflation and gas prices. It’s the first time ever that a majority has blamed the government for their problems, according to Monmouth.
Worse, when middle class families were asked whether Biden’s policies had helped them, only 41 percent said they had while 54 percent said “not at all”; in January 2021, 65 percent responded that they had been helped by Trump’s policies.
The far left cannot acknowledge that their playbook is unpopular. Somehow, progressives who pushed Joe Biden into the Oval Office convinced themselves – and the president – that they had won a mandate to transform the nation.
Indeed, they came close. They came within a whisker of pushing through Build Back Better, allocating trillions of dollars to all their pet causes and fundamentally changing the nature of our economy. Thankfully Sen. Joe Manchin (D-W.Va.) has had the courage to fight the progressive tide.
Of course, the fact that one senator could stonewall the reckless Build Back Better bill proves that Biden had no mandate to turn our country upside down. A president elected with a mandate would have brought along a solid majority in the House and the Senate; Joe did not.
But here is worse news for the New York Times and other apostles of the progressive playlist: Your moment has passed. Politicians across the country running on the Bernie agenda have been losing, repeatedly.
Even in deep-blue cities such as New York and San Francisco, voters have tossed out far-left candidates in favor of establishment picks. The humiliating recall of District Attorney Chesa Boudin and the firing earlier this year of three leftwing school board members in San Francisco, a woke city that is bleeding businesses and residents, could be just the beginning of a dramatic turn in local politics.
In more recent Democrat primaries, well-financed firebrands like Bernie Sanders acolyte Nina Turner in Ohio lost to more moderate candidates, while other progressives lost in North Carolina and Kentucky.
In New York, progressive candidates also lost to more centrist figures, though in that state “centrist” describes anyone not avowedly socialist. Still, in the primary contests for governor and other state officers, candidates backed by Rep. Alexandria-Ocasio Cortez (D-N.Y.) were left at the door.
Why has the air gone out of the progressive balloon? Soaring crime has turned voters against the “defund the police” movement, and inflation has destroyed enthusiasm for the kind of no-limits spending that progressive Democrats favor.
Meanwhile, as food lines are growing across the nation and gasoline prices are eating up weekly paychecks, voters see their president pushing to spend hundreds of billions of dollars on climate change, an issue that ranks number 12 among the issues most concerning Americans, according to Monmouth.
Number 12, with exactly 1 percent of respondents saying it is their top concern, after inflation, gas prices, everyday bills, abortion rights, guns, health care costs, job security etc. And yet our president mulishly sits on our oil and gas producers, begging Saudi Arabia to pump more oil while preventing his own country from doing so.
The Times is right. Joe Biden could be too old to be president. But his progressive playbook is also all wrong. Voters get it, even if the liberal media does not.
Posted by High Plains Pundit on July 20, 2022
Email ThisBlogThis!Share to TwitterShare to FacebookShare to Pinterest
Tags: National