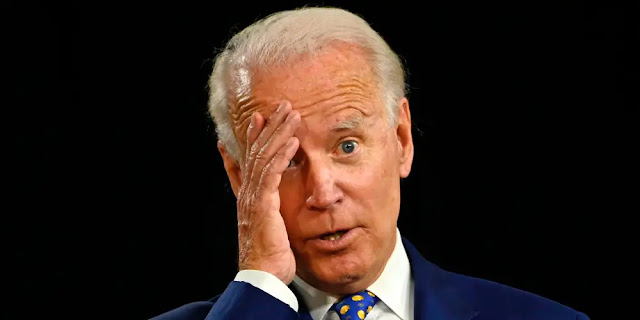 The RealClearPolitics poll average shows Joe Biden’s presidency reaching terminally unpopular levels, with a 38 percent approval and 57 percent disapproval — nearly 20 points underwater.
It is almost redundant at this point to look at the details of individual polls, but the latest national Monmouth poll is just a massacre.
Since April 2021, Biden’s approval rating has held steady or gotten worse in every single Monmouth poll, and he is now at 36 percent approval to 58 percent disapproval, consistent with the general trend in which he continues to sink no matter which pollster is asking the questions. Eighty-eight percent of voters say the country is on the wrong track. Seventy-eight percent disapprove of the job Congress is doing. Biden’s approval is 29 percent vs 63 percent disapproval with independents, and 28 percent vs 63 percent disapproval with voters age 18-34.
Monmouth clumps all non-white voter groups together instead of breaking out black, Hispanic, and Asian voters, but Biden is just even with them (47-47), suggesting some ghastly numbers with Hispanic and Asian voters.
Seventy percent of those polled listed the top issue as some variant of kitchen-table economic concerns: inflation (33 percent), gas prices (15 percent), the economy (9 percent), everyday bills (6 percent), health-care costs (3 percent), jobs (3 percent), college costs (2 percent), mortgage/rent (2 percent), and taxes (1 percent). That dwarfed concerns over abortion (5 percent), guns (3 percent), crime (2 percent), climate change (1 percent), immigration (zero), or national security (zero).
How are things going for Biden and the Democrats who run Congress on those issues?
57% say that the actions of the federal government over the past six months have hurt their family when it comes to their most important concern.
54% of Americans say the middle class has not benefited at all from Biden’s policies. This is up from 36% one year ago and it is also higher than 36% who said the same about former President Donald Trump at about the same point in his term (April 2018). It is even higher than 46% who said the same about former President Barack Obama in 2013, when Monmouth first posed this question.
Just 7% say the middle class has been helped a lot by Biden’s policies and 34% say they have been helped a little. A majority (52%) also say that poor families have not benefited from Biden’s presidency, up from 29% in July 2021.
The current result was similar for Trump in 2018 (53%) but it is higher than it was for Obama in 2013 (37%).
When it’s four months to Election Day and 57 percent of the voters say that your current and recent policies are making things personally worse for them on their most important issue, you are not in a good place.
Opinion